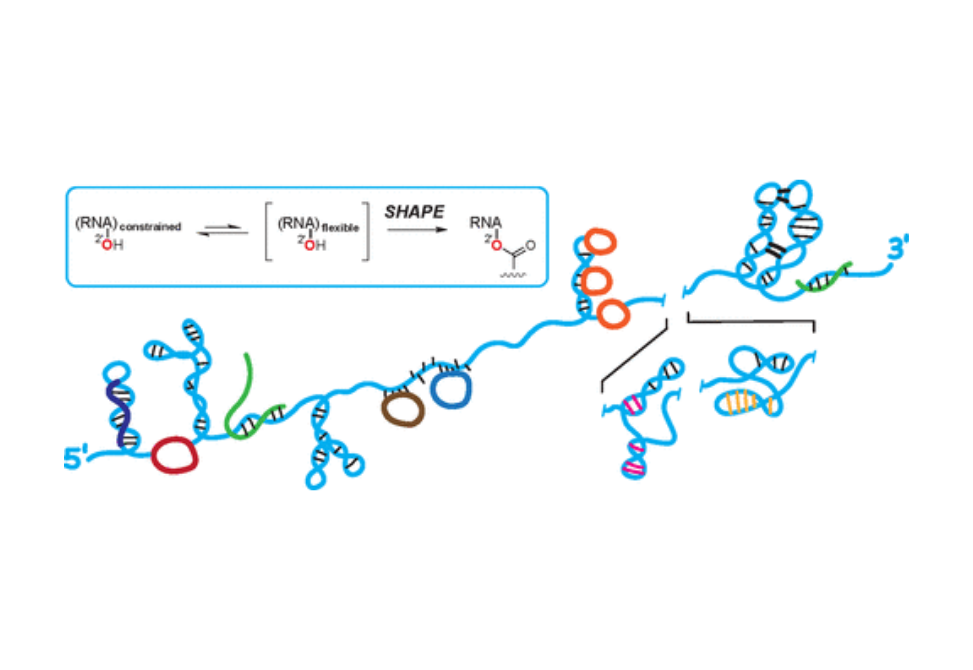 RNA lies upstream of nearly all biology and functions as the central conduit of information exchange in all cells. RNA molecules encode information both in their primary sequences and in complex structures that form when an RNA folds back on itself. From the time of discovery of mRNA in the late 1950s until quite recently, we had only a rudimentary understanding of RNA structure across vast regions of most messenger and noncoding RNAs. This deficit is now rapidly being addressed, especially by selective 2′-hydroxyl acylation analyzed by primer extension (SHAPE) chemistry, mutational profiling (MaP), and closely related platform technologies that, collectively, create chemical microscopes for RNA. These technologies make it possible to interrogate RNA structure, quantitatively, at nucleotide resolution, and at large scales, for entire mRNAs, noncoding RNAs, and viral RNA genomes. By applying comprehensive structure probing to diverse problems, we and others are showing that control of biological function mediated by RNA structure is ubiquitous across prokaryotic and eukaryotic organisms.

Work over the past decade using SHAPE-based analyses has clarified key principles. First, the method of RNA structure probing matters. SHAPE-MaP, with its direct and one-step readout that probes nearly every nucleotide by reaction at the 2′-hydroxyl, gives a more detailed and accurate readout than alternatives. Second, comprehensive chemical probing is essential. Focusing on fragments of large RNAs or using meta-gene or statistical analyses to compensate for sparse data sets misses critical features and often yields structure models with poor predictive power. Finally, every RNA has its own internal structural personality. There are myriad ways in which RNA structure modulates sequence accessibility, protein binding, translation, splice-site choice, phase separation, and other fundamental biological processes. In essentially every instance where we have applied rigorous and quantitative SHAPE technologies to study RNA structure–function interrelationships, new insights regarding biological regulatory mechanisms have emerged. RNA elements with more complex higher-order structures appear more likely to contain high-information-content clefts and pockets that bind small molecules, broadly informing a vigorous field of RNA-targeted drug discovery.

The broad implications of this collective work are twofold. First, it is long past time to abandon depiction of large RNAs as simple noodle-like or gently flowing molecules. Instead, we need to emphasize that nearly all RNAs are punctuated with distinctive internal structures, a subset of which modulate function in profound ways. Second, structure probing should be an integral component of any effort that seeks to understand the functional nexuses and biological roles of large RNAs.