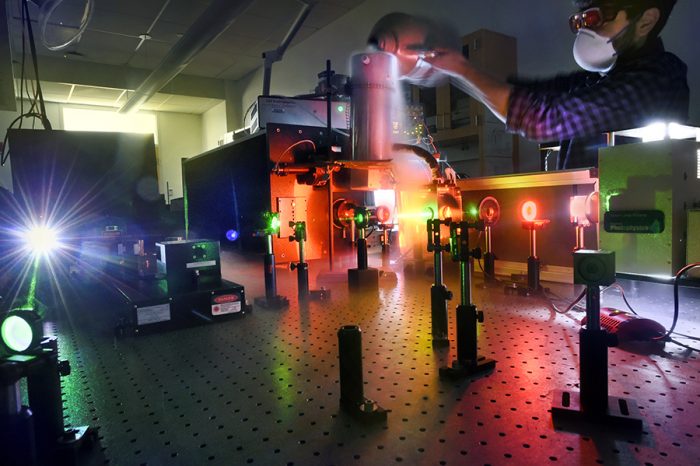 Pictured: CHASE researchers will use advanced spectroscopic techniques to investigate the conversion of sunlight to storable liquid fuels. Credit: Donn Young/UNC-CH College of Arts and Sciences

The U.S. Department of Energy (DOE) will provide $100 million in funding to new artificial photosynthesis research projects, including a $40 million award to the North Carolina-based Center for Hybrid Approaches in Solar Energy to Liquid Fuels (CHASE) to accelerate fundamental research of the production of fuels from sunlight.

The University of North Carolina at Chapel Hill leads the CHASE partnership, which will work to develop hybrid photoelectrodes for fuel production that combine semiconductors for light absorption with molecular catalysts for conversion and fuel production.

“We have assembled a very strong team to set brand–new directions in this field,”said Gerald Meyer, director of the CHASE Hub. “Our focus is to use the sun’s energy to directly generate storable liquid fuels.”

The CHASE proposal was developed under the guidance of the UNC Solar Energy Research Center, SERC, founded in 2008 to serve as a regional hub for solar energy research. Its mission is to develop new ways to capture and store energy of the sun in the high-energy chemical bonds of carbon-based solar fuels. A DOE Energy Frontier Research Center, EFRC, established at UNC in 2009, provided foundational research on renewable energy and leveraged North Carolina’s role as a national leader in solar energy production.

“With this support, CHASE will build on a strong foundation of solar energy research here at UNC and establish critical new partnerships that will enable the transformative scientific advances needed to realize liquid solar fuels,” said Jillian Dempsey, deputy director of the CHASE Hub.

A second partnership funded by DOE, the Liquid Sunlight Alliance (LiSA), headquartered at the California Institute of Technology, will receive $60 million to pursue an approach called “co-design,” which seeks to streamline the complicated steps needed to convert sunlight into fuels to make the process more efficient.

LiSA and CHASE will succeed the Joint Center for Artificial Photosynthesis (JCAP), the DOE Fuels from Sunlight Energy Innovation Hub, which was established in 2010, and is concluding this year.

The DOE Fuels from Sunlight Energy Innovation Hub program will continue through the combined efforts of LiSA and CHASE. Both are expected to build on the accomplishments of JCAP, as well as several DOE Energy Frontier Research Centers and core research efforts devoted to artificial photosynthesis.

“Sunlight is the world’s most basic energy source, and an ability to generate fuels directly from sunlight has the potential to revolutionize the U.S. energy economy,” said Under Secretary for Science Paul Dabbar in a press release announcing the awards. “This effort will keep America at the forefront of artificial photosynthesis research, a field of great challenge but also huge promise.”

The Department’s investment in the Fuels from Sunlight Energy Innovation Hub program represents a continuing large-scale commitment of U.S. scientific and technological resources to this highly competitive and promising area of investigation.