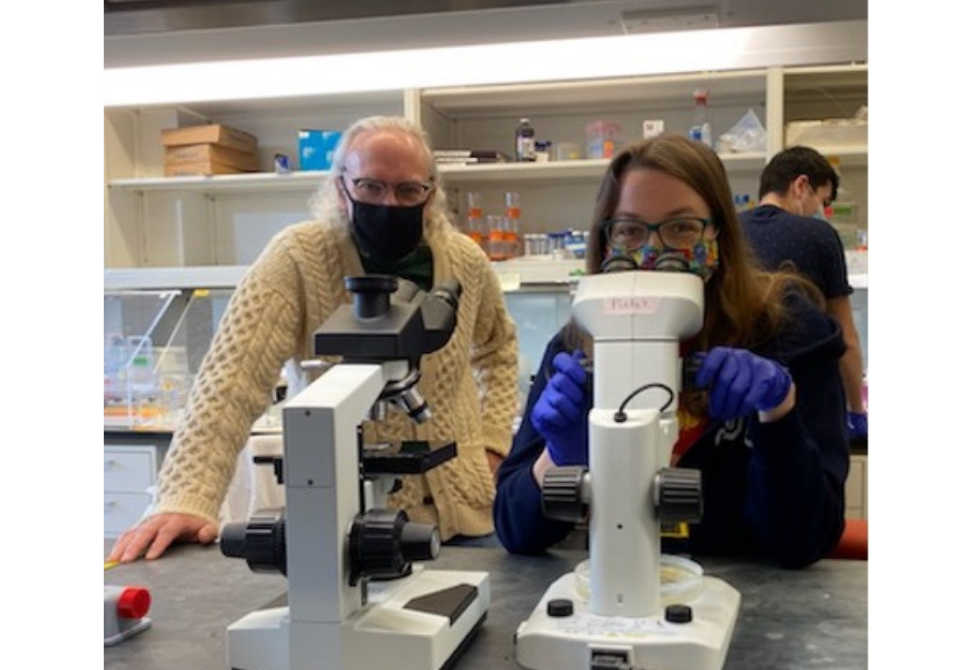 The Pielak Research Group is currently one of few chemistry labs studying the molecular mechanisms of tardigrade desiccation tolerance, which is the ability to survive being nearly completely dried out. Tardigrades are microscopic animals, sometimes called “water bears” because of their “chubby bear-like appearance.”

An image of tardigrades under a microscope. (Photo courtesy of Pielak and Gladfelter labs)

Although tardigrades do not favor extreme environments, their unique biochemical composition allows them to adapt to and tolerate extreme conditions, such as temperatures near absolute zero and above the boiling point of water, 1000x more radiation than the average animal, and even the vacuum of outer space.

Many of these “superpowers” only arise when tardigrades are dried to less than 5% of their original water content. “When exposed to dehydrating conditions, tardigrades enter a hybernative state called a ‘tun,’ in which they can stay for upwards of a decade, only to reanimate within 20 minutes after coming in contact with a drop of water,” explains Candice Crilly, a fifth year Ph.D. student in the Pielak Research Group.

Tardigrades’ ability to survive near-complete-dehydration is a superpower-in-and-of itself, because water plays a huge role in determining the structure and function of proteins – the molecules that make life happen. One focus of research in the Pielak Group is understanding how proteins unique to tardigrades, called “tardigrade disordered proteins,” or TDPs, allow these animals to survive losing nearly all their water. Another goal is to determine how TDPs protect other proteins from the destructive effects of drying. If their efforts come to fruition, the knowledge would be important in both academia and the pharmaceutical industry.

Currently, many RNA and protein-based medicines, such as vaccines, antibodies and hormones, collectively called biologics, must be transported via the so-called “cold chain.” Cold chain technologies involve temperature-controlled units that preserve the content within, much like your refrigerator at home. However, maintaining the cold chain is costly, and mechanical failures are ruinous.

One potential way to avoid such problems is to freeze-dry the biologics. In theory, freeze-drying would allow biologics to be stored at room temperature for long periods of time, similar to the freeze-dried strawberries in a box of cereal. In practice, however, most biologics cannot withstand the destructive effects of water loss. Adding TDPs to biologics before drying may protect them against the destructive effects of water loss, allowing freeze-dried versions of these medicines to come to market. By eliminating the need for the cold chain, freeze-drying biologics with TDPs would reduce their cost, making them more widely available while contributing to a greener world.

The Pielak Group began research on TDPs approximately five years ago. Their research has shown that these tardigrade proteins protect a variety of enzymes from dehydration stress, and that they do not cause a detrimental immune response in mice. In the near future, the Pielak lab plans to use Liquid-Observed Vapor Exchange (LOVE) Nuclear Magnetic Resonance, a technique they developed over the past year and a half, to study how TDPs affect the dehydrated structure of other proteins. “We know a lot about the structure of proteins in water. We know almost nothing of their structure in the dry state,” said Gary Pielak, Kenan Distinguished Professor of Chemistry.