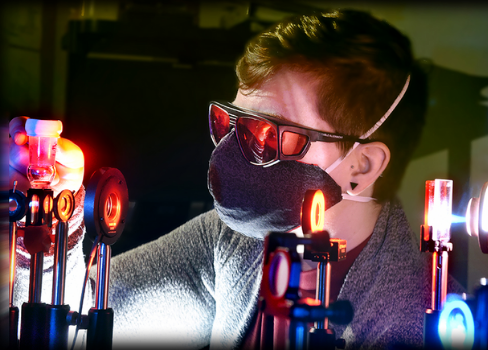 By DeLene Beeland, UNC-Chapel Hill College of Arts and Sciences

Carolina chemists are leading a multi-institutional effort to probe whether a new generation of sustainable fuels can be made by artificially accelerating the photosynthetic process. The effort is guided by a vision to reduce our reliance on fossil fuels and find a clean, sustainable energy source for generations to come.

The United States gets about 81% of its energy from fossil fuels such as coal, oil and natural gas, according to the National Academies of Sciences, Engineering and Medicine. However, such fuels are a limited resource and will one day run out. Burning them causes air pollution and is changing the planet’s atmosphere in ways that affect our climate.

The ambitious goal of the Center for Hybrid Approaches in Solar Energy to Liquid Fuels (CHASE) is to make liquid fuels directly from sunlight and air — fuels that are clean and storable to boot.

Directed by UNC chemistry professor Gerald Meyer, CHASE received $40 million last summer from the U.S. Department of Energy to expedite basic research into artificial photosynthesis to create liquid fuels that can be stored and utilized when the sun has set.

The researchers intend to use only the components found in air — water, carbon dioxide and nitrogen — with sunlight as the only energy source.

“Shortly after we received the DOE funding, they told me that we were in this to see if it could be done,” Meyer said. “Is it even possible?”

In the first, the researchers’ challenge will be to design novel molecules that can carry out a series of chemical reactions when energized by the sun’s energy and fed only by water, carbon dioxide and nitrogen captured from air. They will also need to troubleshoot how to integrate these designer molecules with silicon, a light-absorbing material that is prevalent in solar energy applications.

“Silicon is the backbone of the photovoltaic industry,” Meyer said. “It has strong light-absorbing and semiconductor properties.”

The second focus will investigate how to design a system that can function well despite weather and over long periods of time.

“Sunlight can be very harsh,” Meyer said. “And we’re putting molecules on a black light-absorbing surface. What’s to prevent them from just burning up?”

The final area of research will address the challenge of linking these designer molecules to achieve a series of desired chemical reactions to produce a single product. The linked reactions would continue until they create an end-product liquid fuel, such as butanol.

The problem of designing innovative clean, renewable energy is vast. CHASE Deputy Director Jillian Dempsey points out that plants naturally do what the center is trying to replicate.

“They do this with 1% efficiency and their catalysts falling apart every hour,” said Dempsey, who is the Bowman and Gordon Gray Distinguished Term Professor in UNC’s department of chemistry. “Plants can do it because they are living systems, and they are constantly repairing those architectures. But we are trying to figure out how to do this with higher efficiencies than what nature does.”

“We have brought together researchers from different backgrounds who don’t traditionally work together, and there is this new, creative angle to approach the problems we are trying to solve,” Dempsey said.

Founding future technologies is heady work, and Dempsey says the team has been running on adrenaline since receiving funding. Its first step is to establish proof of concept.

“But our dream is to get things efficient enough that this system could eventually be used in people’s homes,” Meyer added. “I don’t know if I’ll see that in my lifetime, but I hope to.”