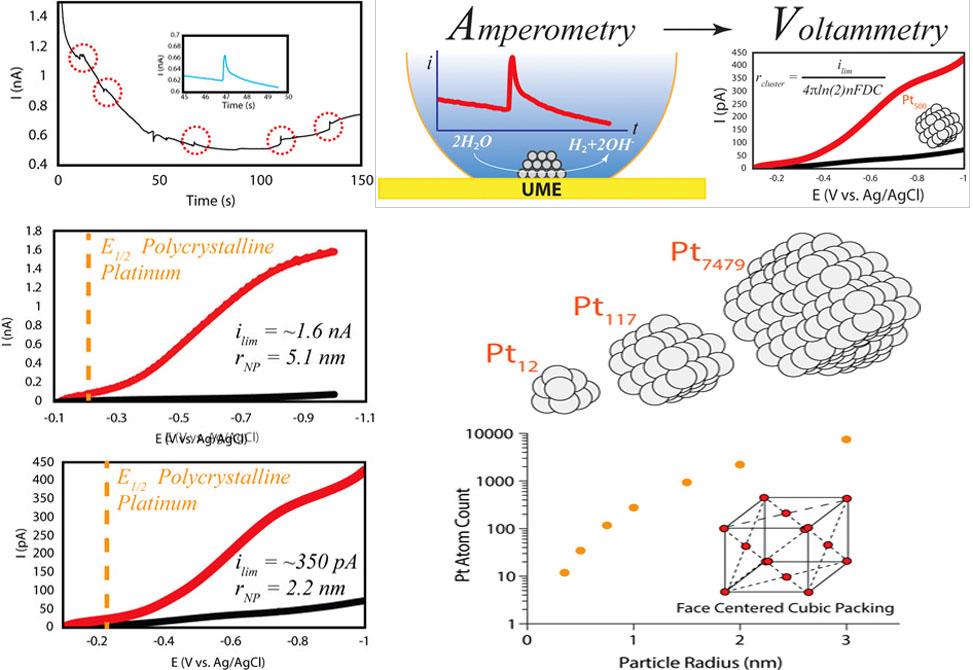 Published in Analytical Chemistry, researchers in the Jeffrey Dick Group demonstrate a method to electrodeposit and observe the electrocatalysis of small platinum clusters and nanoparticles, NPs, in real time as they form on an ultramicroelectrode, UME.

Water droplets, rdrop ∼ 700 nm, stabilized bysodium dodecyl sulfate, SDS, were suspended in a solution of dichloromethane,DCM, and tetrabutylammonium perchlorate, which was used to mitigate charge balance during droplet electrolysis. When droplets collided with an UME biased sufficiently negative to drive water reduction, large blips of current were observed.

Droplets were synthesized with varying concentrations of H2PtCl6, from 24.4 mM to 32 nM, which can be reduced to Pt0 at 0.8 V more positive than water reduction on a Au or C UME. The observation of current blips synthesized with mM amounts of H2PtCl6 indicated water droplets deliver H2PtCl6 to the electrode surface, where a cathodic potential caused Pt NPs to form.

Droplet electrolysis allows for a large amplification such that the electrocatalysis of clusters can be observed in real time. Single, isolated clusters were further characterized voltammetrically on carbon fiber UMEs. The isolation step used the amperometric method, which unambiguously depicted cluster formation in real time. Carbon was chosen due to its large potential window and slow kinetics toward many inner-sphere reactions, such as proton reduction, used in this study.

Voltammetric characterization of proton reduction in HClO4 and NaClO4 allowed for cluster size analysis using the limiting current. The reduction of proton on the clusters (E1/2 ∼ −0.6 V vs Ag/AgCl) occurred at ca. 400 mV more negative than bulk, polycrystalline platinum.