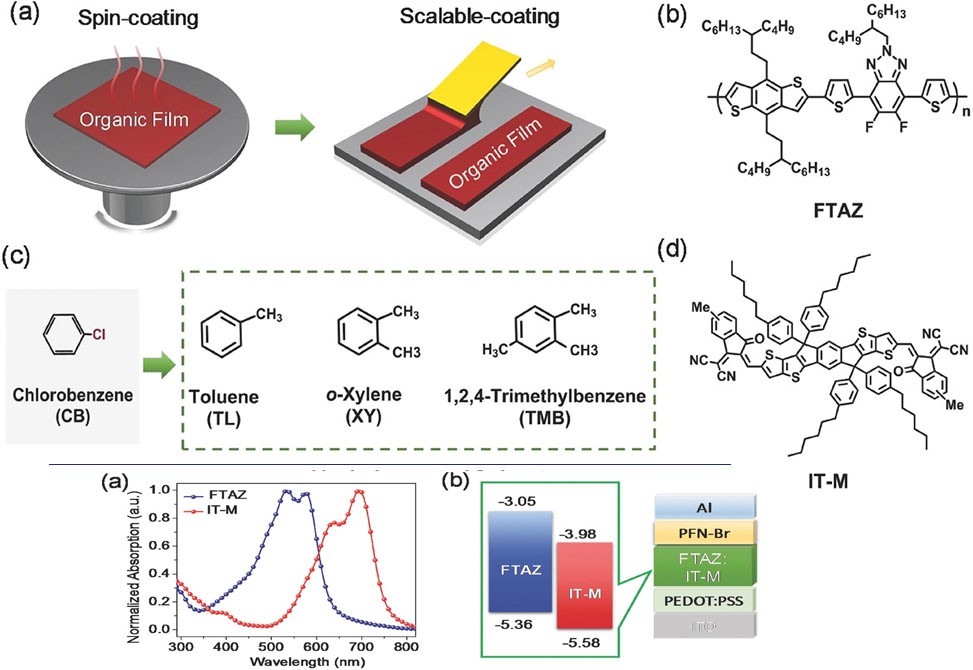 The commercialization of nonfullerene organic solar cells, OSCs, critically relies on the response under typical operating conditions, for instance, temperature and humidity, and the ability of scale‐up. Despite the rapid increase in power conversion efficiency, PCE, of spin‐coated devices fabricated in a protective atmosphere, the efficiencies of printed nonfullerene OSC devices by blade coating are still lower than 6%. This slow progress significantly limits the practical printing of high‐performance nonfullerene OSCs.

Published in Advanced Materials, researchers in the You Group introduce a new and relatively stable nonfullerene combination, created by pairing the nonfluorinated acceptor IT‐M with the polymeric donor FTAZ. Over 12% efficiency can be achieved in spin‐coated FTAZ:IT‐M devices using a single halogen‐free solvent.

More importantly, chlorine‐free, blade coating of FTAZ:IT‐M in air is able to yield a PCE of nearly 11% despite a humidity of =50%. X‐ray scattering results reveal that large π–π coherence length, high degree of face‐on orientation with respect to the substrate, and small domain spacing of =20 nm are closely correlated with such high device performance.

The material system and approach yield the highest reported performance for nonfullerene OSC devices by a coating technique approximating scalable fabrication methods and hold great promise for the development of low‐cost, low‐toxicity, and high‐efficiency OSCs by high‐throughput production.