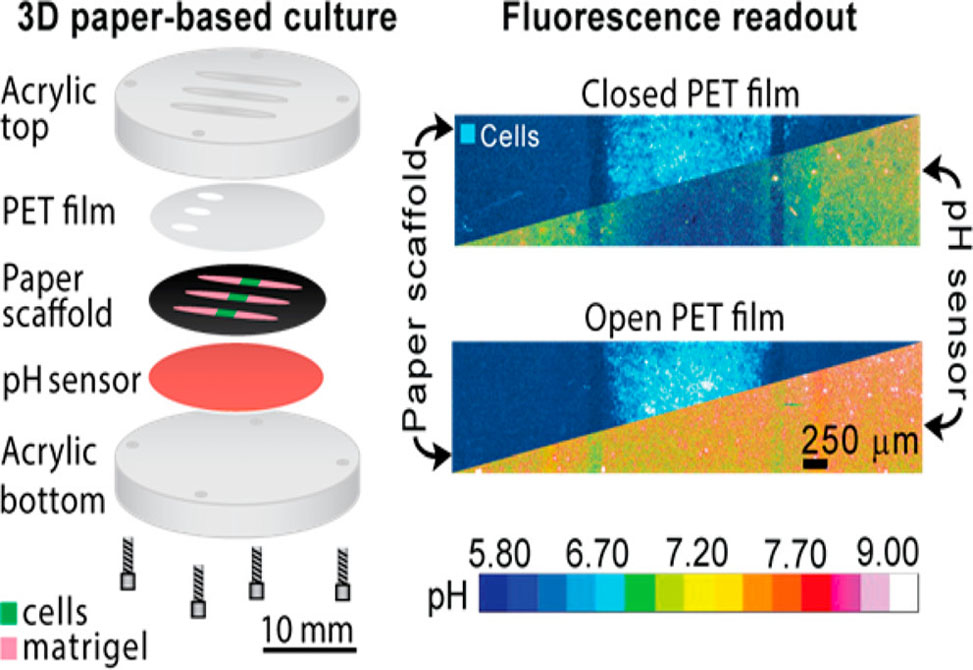 Paper-based cultures are an emerging platform for preparing 3D tissue-like structures. Chemical gradients can be imposed upon these cultures, generating microenvironments similar to those found in poorly vascularized tumors. There is increasing evidence that the tumor microenvironment is responsible for promoting drug resistance and increased invasiveness. Acidosis, or the acidification of the extracellular space, is particularly important in promoting these aggressive cancer phenotypes.

To better understand how cells respond to acidosis there is a need for 3D culture platforms that not only model relevant disease states but also contain sensors capable of quantifying small molecules in the extracellular environment. In work published in Analytical Chemistry, scientists in the Lockett Group describe pH-sensing optodes that are capable of generating high spatial and temporal resolution maps of pH gradients in paper-based cultures.

This sensor was fabricated by suspending microparticles containing pH-sensitive, fluorescein, and pH-insensitive, diphenylanthracene, dyes in a polyurethane hydrogel, which was then coated onto a transparent film. The pH-sensing films have a fast response time, are reversible, stable in long-term culture environments, have minimal photobleaching, and are not cytotoxic. These films have a pKa of 7.61 ± 0.04 and are sensitive in the pH range corresponding to normal and tumorigenic tissues. With these optodes, group members measured the spatiotemporal evolution of pH gradients in paper-based tumor models.