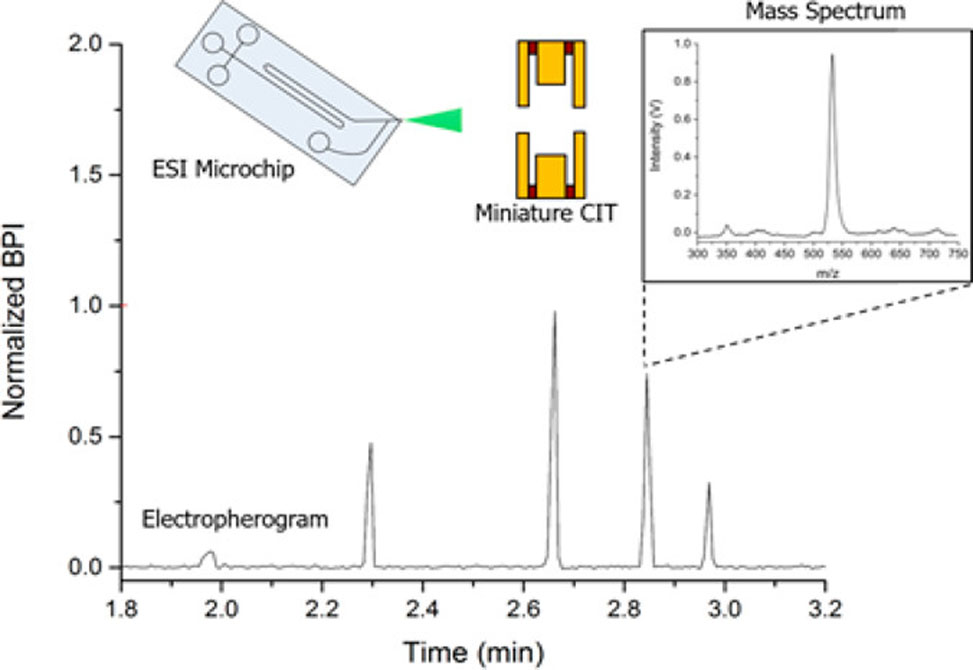 Mass spectrometry, MS, is a powerful analytical technique due to its sensitivity, versatility, and ability to provide chemical and structural information on molecules. Electrospray ionization, ESI, has significantly expanded the range of mass spectrometric analysis beyond the gas phase and volatile molecules to include biomolecules and other liquid-borne analytes. ESI has also made it possible to couple a separation step such as liquid chromatography, LC, or capillary electrophoresis, CE, with MS detection. LC-MS systems however are typically confined to the laboratory due to their size, expense and power requirements. The development of a smaller, more portable, less expensive and simpler liquid phase separation/MS analytical platform could move the analysis from the laboratory to potential on-site, or compact benchtop, use.

Published in Analytical Chemistry, members of the Ramsey Group demonstrate the coupling of a microchip ESI source with high pressure mass spectrometry, HPMS, via an atmospheric inlet and direct current optics. The HPMS consisted of a miniature cylindrical ion trap, mini-CIT, operated at ≥ 1 Torr.

The viability of the interface was proven with the infusion of amino acids and peptides from a microchip ESI source. The CE-ESI-HPMS performance was demonstrated with the separation of a 4-peptide mix. Comparable efficiencies were observed with the HPMS system and a commercial MS though with reduced S/N ratios for the HPMS. As expected, broader MS peak widths were also seen for the mini-CIT due to high pressure-operation. The smaller footprint and power requirements of the microchip CE and HPMS system has the potential to replace the more expensive and bulky LC-MS systems for targeted species applications.