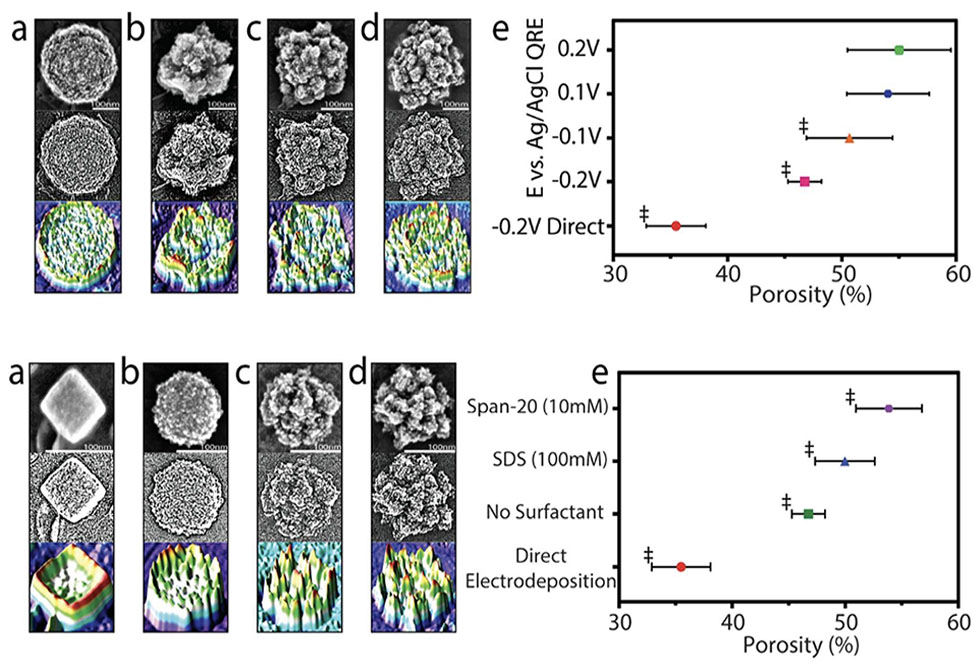 Prodigious resources are currently being devoted to control the size and morphology of metal nanoparticles, NPs. Several homogeneous chemical and photochemical techniques exist for the synthesis of metal NPs. However, these synthetic methods generally leave a distribution of NP shapes and sizes and require a stabilizing ligand to prevent aggregation.

Although spatial control on the conductive surface is difficult to attain, even on well-behaved materials like highly oriented pyrolytic graphite, electrodeposition of metal NPs onto conductive surfaces is a versatile technique.

In work just accepted for publication in ACS Applied Nano Materials, researchers in the Jeffrey Dick Group, describe how they achieve spatial control of Pt NPs on amorphous graphite by confining a precursor metal salt, such as hexachloroplatinic acid, HCPA, to a water droplet suspended in oil, such as dichloroethane. 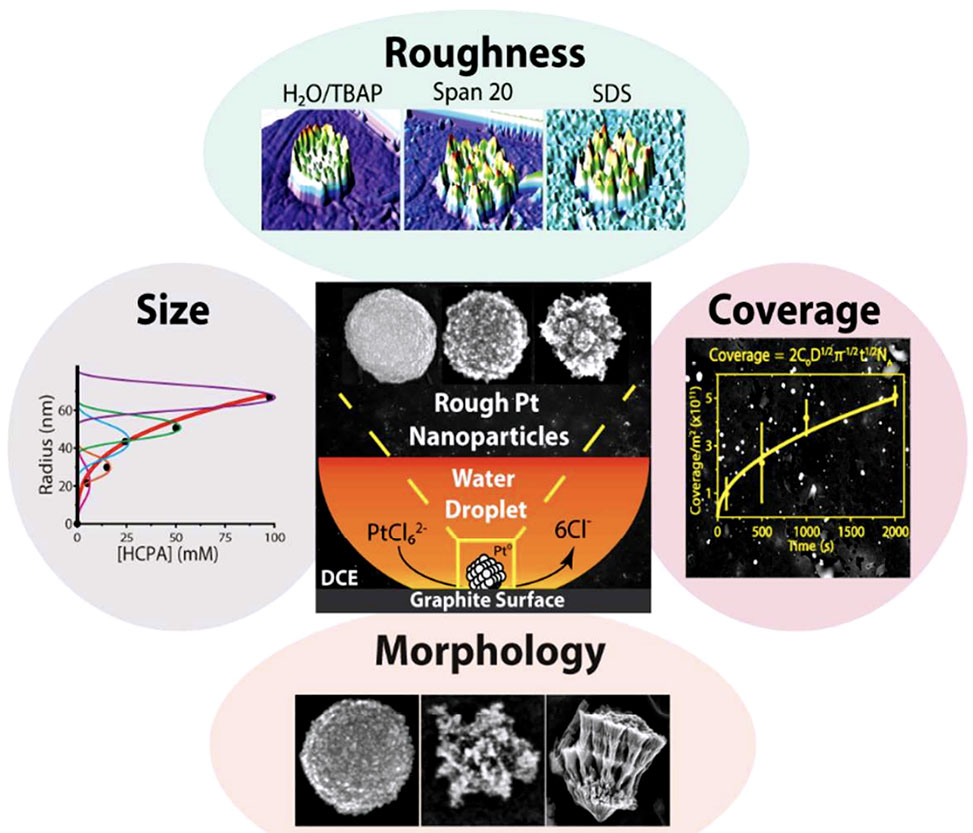 Graphical representation of the experimental method highlighting the ability to tune concentration of metal precursor, deposition time, deposition potential, and surfactant species to gain control over NP size, porosity, coverage, and morphology. The center graphic represents the mechanism of deposition as a droplet stochastically collides with the electrode surface where its contents are electrolyzed to are electrolyzed to a Pt0 NP.


When a graphite electrode was placed in solution and biased at a mild potential, -0.7 V vs. the ferrocene/ferrocenium couple, Cp2Fe0/+, droplet mediated electrodeposition produced NPs characterized by the electrochemical collision method and scanning electron microscopy, SEM. The flux of droplets to the graphite surface followed the familiar Cottrell relationship for semi-infinite linear diffusion. Pt NP size-selectivity can be directly modulated by tuning the initial concentration of HCPA in the droplet.

Interestingly, the size, morphology, roughness, and coverage is shown to be influenced by the surfactant used to stabilize the water droplets, the concentration of HCPA, and the deposition potential. For instance, no surfactant, sodium dodecyl sulfate, SDS, and Span-20 generated NPs with relative roughness values of 46, 50, and 54% respectively.

Importantly, the incorporation of Span-20, a neutral emulsifier, facilitated homogenously distributed Pt NP surface coverage on amorphous graphite, indicating the technique is apathetic to basal planes and edges of the graphite surface. The addition of SDS to droplets with large concentrations of HCPA resulted in conical and pillar-like NP morphologies, furthur enhancing surface area.

The group members also explored the effect of deposition potential, indicating that the roughness of the NPs can be increased by ~10% depending on the potential. Furthermore, they also demonstrate that the method can be extended for the deposition of several other metal NPs, including silver, gold, copper, tin, iron, and cerium onto various substrates such as gold, silicon, boron-doped diamond, and HOPG. The advantage of this technique is that size-selective electrodeposition of ligand-free, uniformly distributed NPs can be achieved.