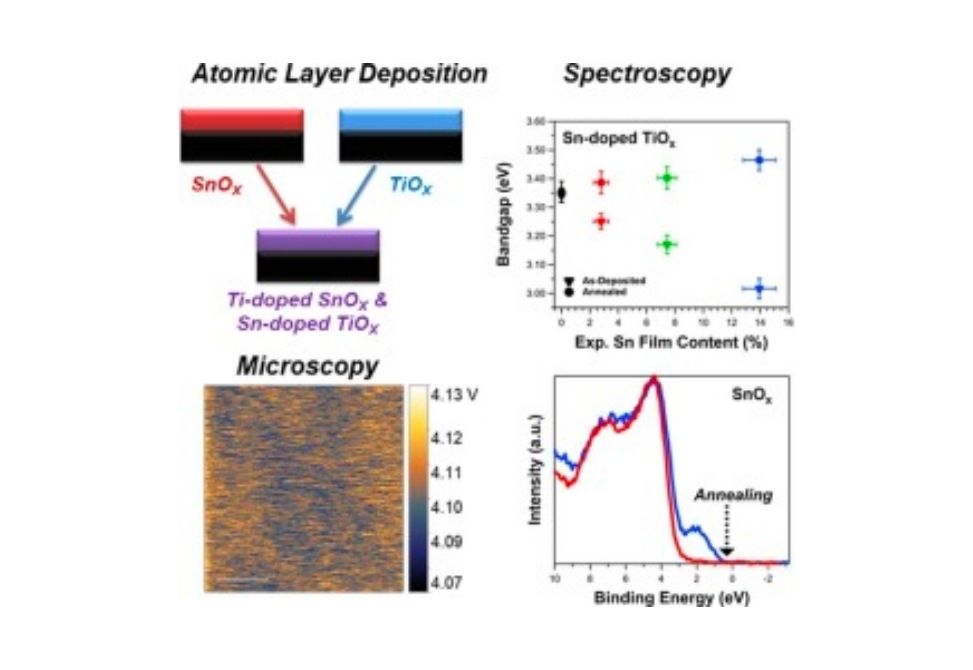 Abstract
Ternary atomic layer deposition of Sn-doped TiOx (Sn:TiOx) and Ti-doped SnOx (Ti:SnOx) was performed using tetrakisdimethylamidotitanium (IV) and tin(IV) with water at 150 °C on (1 0 0) Si and quartz substrates. The physical structure of the films was investigated using scanning electron, atomic force, and Kelvin probe force microscopies as well as spectroscopic ellipsometry, Raman spectroscopy, and X-ray diffraction. All as-deposited films are amorphous and possessed flat and conformal topographies with low surface roughness (<1 nm). Annealed Sn:TiOx and Ti:SnOx crystallize into the tetragonal anatase TiO2 and cassiterite SnO2 structures, respectively, without large variations to the film topography. The chemical composition of the as-deposited and annealed films was investigated through X-ray photoelectron spectroscopy. While dopants are homogenously mixed, the ternary ALD to form Sn:TiOx and Ti:SnOx surprisingly does not follow the rule of mixtures, despite similarities in both the growth rates of binary SnOx and TiOx and the precursors used. This finding is also supported by spectroscopic ellipsometry. We postulate the deviation from the rule of mixtures is due to non-ideal surface chemistry of the binary ALD of SnOx. The optical bandgap of all films was quantified by the Tauc analysis and the valence band position was investigated by valence band X-ray photoelectron spectroscopy. Intra-bandgap states above the valence band maximum were observed for as-deposited Ti:SnOx and Sn:TiOx and ascribed to 5 s states from Sn2+ ions. The presence of these intra-bandgap states induces enhanced visible absorption and bathochromic shifts to the apparent bandgap for all as-deposited films. Annealing the films removes the intra-bandgap states and increases the optical bandgap. Simplified band diagrams created using the data available demonstrated that the conduction and valence band positions did not vary between the positions of pure TiO2 or SnO2 with monotonic increases to the dopant incorporation.