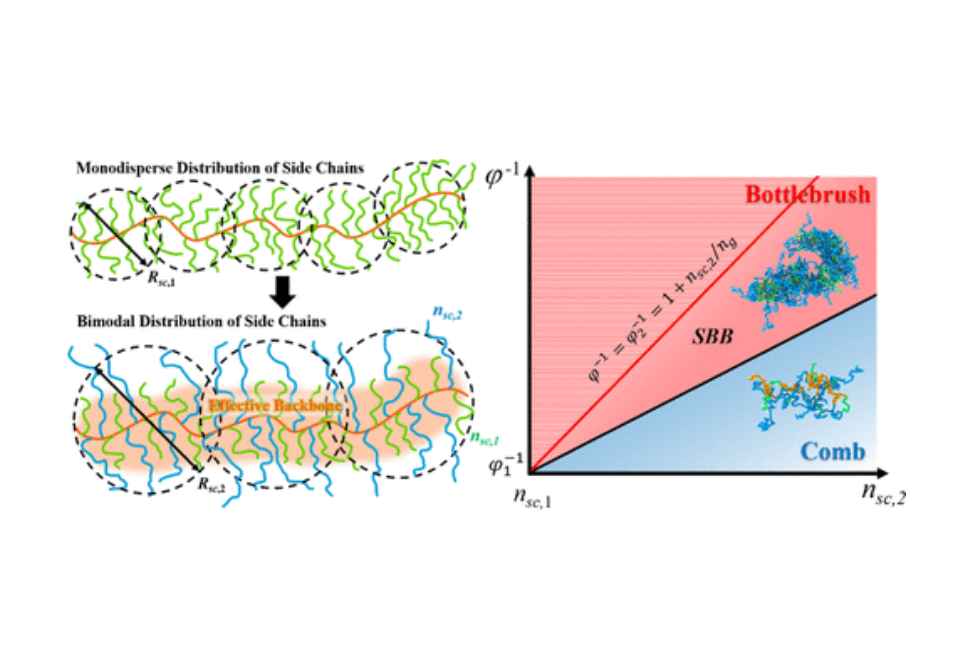 We use a combination of scaling analysis, random phase approximation (RPA) calculations, and coarse-grained molecular dynamics (MD) simulations to elucidate properties of graft polymers with a bimodal distribution of side chains in a melt. In our scaling analysis, a two-step approach is used to classify graft polymers with the grafting density of side chains 1/ng, fraction of short side chains f, and degree of polymerization (DP) of short DP = nsc,1 and long DP = nsc,2 side chains into combs and bottlebrushes. First, a diagram of states of the monodisperse graft polymers with short side chains of DP = nsc,1 and grafting density 1/ng is constructed. During the second step, these graft polymers are considered as backbones with the effective Kuhn length to which the longer side chains are attached at grafting density (1 – f)/ng. This approach allows the reduction of four-dimensional architectural parameter space (ng, nsc,1, nsc,2, f) into two two-dimensional projections. In the framework of this representation, we extended the concept of crowding parameter Φ, describing the degree of mutual interpenetration of the side chains belonging to neighboring macromolecules, and applied it to derive the effective Kuhn length of graft polymers with two types of side chains as a function of Φ. The predictions of the scaling model for the effective Kuhn length and diagram of states are confirmed by coarse-grained MD simulations. The evolution of the peak position in the static structure factor S(q) obtained in these simulations is analyzed by using the expression for S(q) derived in the framework of RPA. In the bottlebrush regime, the peak position in the scattering function is shown to scale as q*∼⟨nsc⟩–0.39±0.02 with the number average DP of the side chains ⟨nsc⟩, which is in good agreement with the result of the RPA calculations, q*∼⟨nsc⟩–3/8. However, this is a weaker dependence than one expected for q* to be associated with the inter-backbone distance q*∼⟨nsc⟩–0.5.