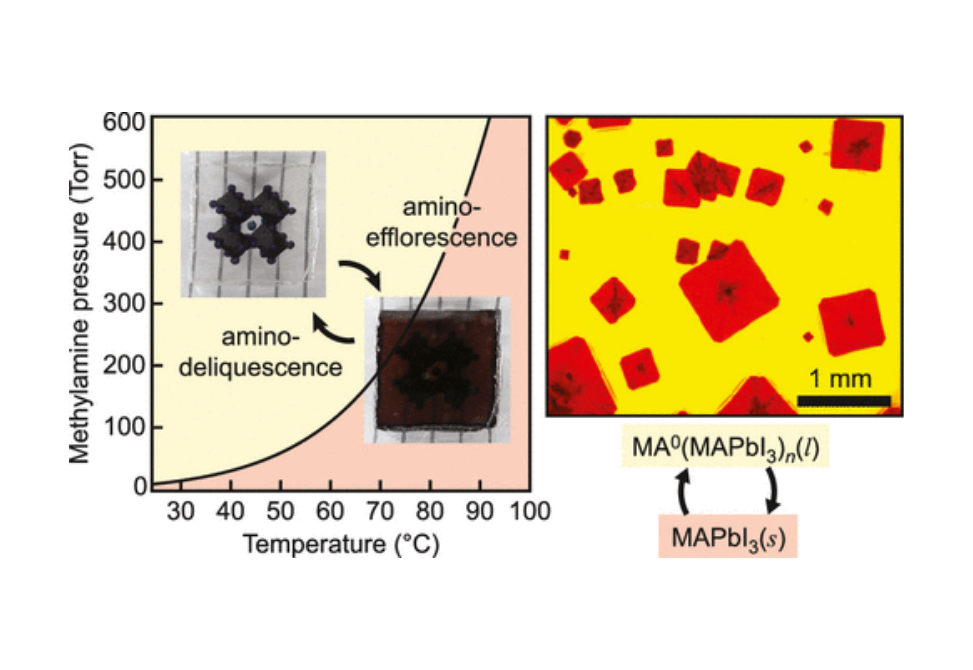 Driven by the exceptional optoelectronic performance and prospective applications of organic–inorganic hybrid perovskites (HPs), an array of methods to synthesize and process HPs has been developed. Although most studies focus on solution processing, a number of reports have examined vapor-phase effects, such as the unusual liquefaction of HP films when exposed to methylamine (MA0) vapor. Here, using in situ spectroscopy and microscopy, we examine the thermodynamics and kinetics of the liquefaction and recrystallization of methylammonium lead iodide (MAPbI3) films with MA0 and find that the phenomena are best described as amino-deliquescence and amino-efflorescence, respectively. By constructing a quantitative phase diagram, we show that amino-deliquescence is driven by the highly exothermic dissolution of MAPbI3 by MA0 with a heat of solution of approximately −96 kJ mol–1, which drives the condensation of MA0 at a pressure more than two orders of magnitude below the equilibrium vapor pressure. Surprisingly, the dissolution is accompanied by a decrease in entropy of ∼173 J mol–1 K–1, suggesting the formation of a liquid state with the semi-ordered MA0 solvent. Kinetic analysis of amino-efflorescence reveals nucleation and growth rates that decrease and increase, respectively, with increasing temperature, which together yield thin-film grain sizes that increase exponentially with temperature to produce millimeter-sized grains. The findings reveal amino-deliquescence as a highly driven thermodynamic process that is potentially a general effect for HP materials in the presence of amines. The apparently ordered nature of the liquid and large grain size after amino-efflorescence may provide a further pathway for control over morphology, crystallinity, and composition of HP systems.