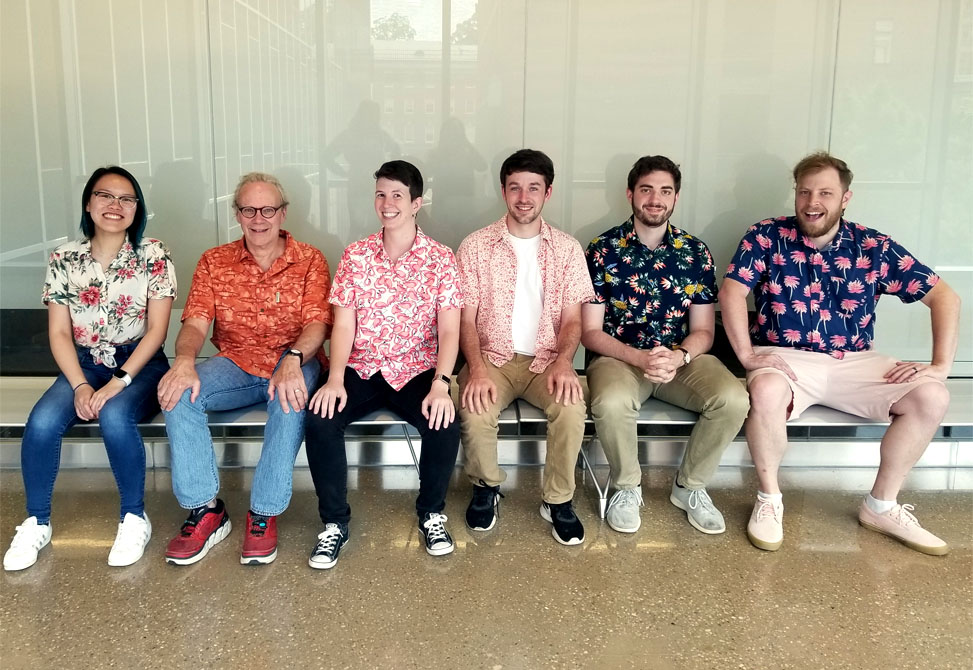 The tradition of "Aloha Friday" in the department of chemistry was revived last Friday, when a number of scientists residing in the Genome Science Building realized that they, by chance, all were wearing Aloha shirts. The tradition, which of course is de rigeur in Hawaii, was introduced to the department many years ago. The image below is from from Friday, May 27th, 2010.

The editor's guess is that since Professor Gary Pielak is the common denominator in these two images, he gets the credit for keeping this elegantly casual tradition alive here.

An article published by Honolulu TV station, KITV, talks about the origin of the tradition in Hawaii: "It's Aloha Friday and that means Aloha attire in Hawaii. While the lightweight and colorful shirts make sense for Hawaii's tropical climate, getting businesses into the tradition of wearing colorful patterned shirts on Fridays took some convincing. Good Morning Hawaii's Maleko McDonnell spoke with Aloha Shirt historian Dale Hope, about the history of the Aloha Shirt and how it made it's permanent stay on Friday's in the state."

"The Aloha Friday thing really look back to Duke Kahanamoku. In the '40s, he went to the Royal Hawaiian Hotel and said 'Hey instead of coats and ties and suits, lets wear long sleeve aloha shirts.' It used to be called Aloha Shirt Friday, and then in 1966, fifty years ago, it actually became Aloha Friday." Hope added that Bill Foster, the Hawaiian Fashion guild along with a group of manufacturers promoted the effort amidst opposition from banks and other businesses that thought serious work could not be done in Aloha Attire."