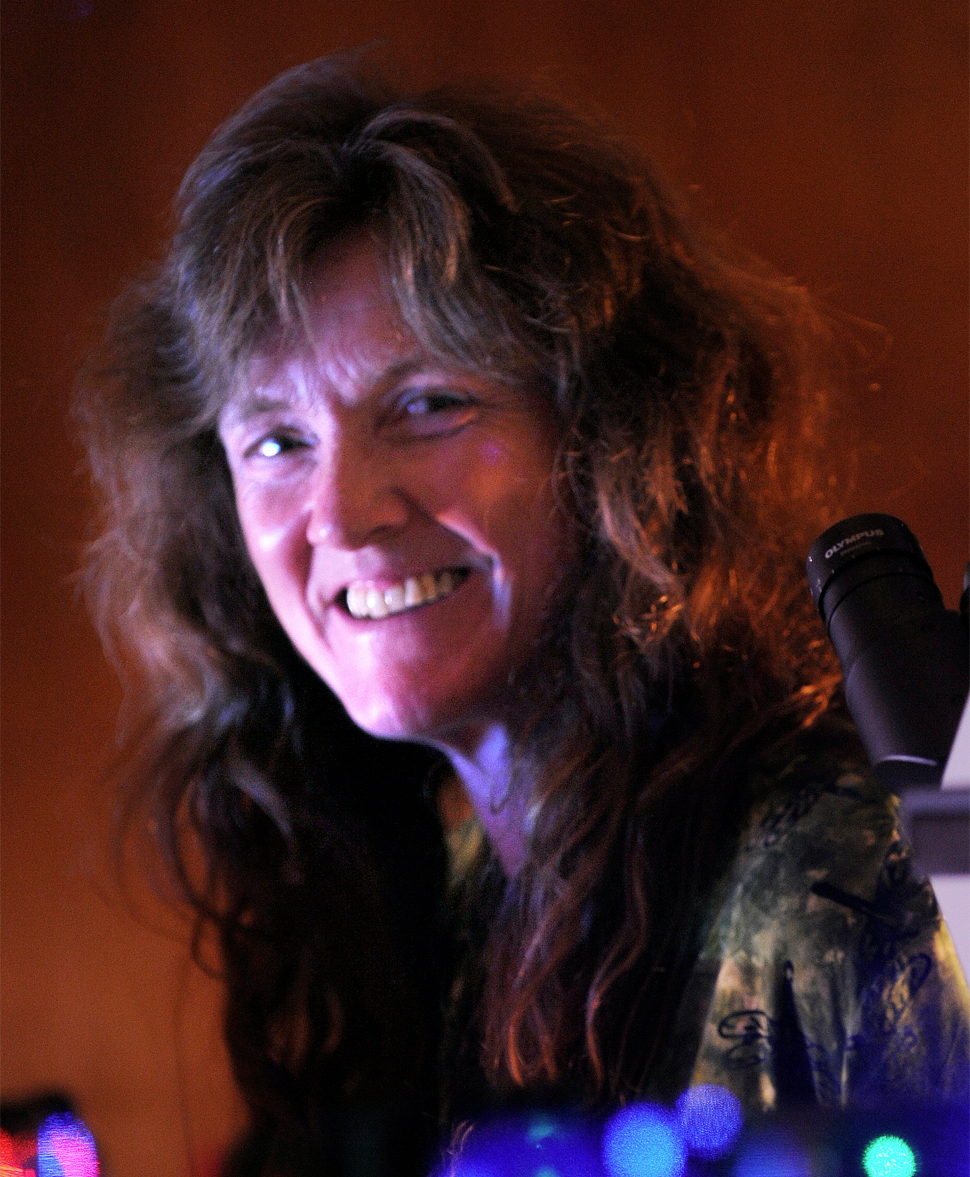 Chemistry Professor, Dorothy Erie (pictured above), collaborates with researchers at North Carolina State University to study how proteins MutL and MutS prevent DNA replication errors by creating an immobile structure that calls more proteins to the site to repair the error.

On the DNA assembly line, two proofreading proteins work together as an emergency stop button to prevent replication errors. Now new research from North Carolina State University and the University of North Carolina at Chapel Hill shows how these proteins – MutL and MutS – prevent DNA replication errors by creating an immobile structure that calls more proteins to the site to repair the error. This structure could also prevent the mismatched region from being “packed” back into the cell during division.

When a cell prepares to divide, the DNA splits, the double helix “unzipping” into two separate backbones. New nucleotides – adenine, cytosine, guanine or thymine – are filled into the gaps on the other side of the backbone, pairing with their counterparts (adenine with thymine and cytosine with guanine) and replicating the DNA to make a copy for both the old and the new cells. The nucleotides are a correct match most of the time, but occasionally – about one time in 10 million – there is a mismatch.

“Although mismatches are rare, the human genome contains approximately six billion nucleotides in every cell, resulting in approximately 600 errors per cell, and the human body consists of more than 37 trillion cells,” says Dorothy Erie, chemistry professor at UNC-Chapel Hill, member of UNC’s Lineberger Comprehensive Cancer Center and co-corresponding author of the work. “Consequently, if these errors go unchecked they can result in a vast array of mutations, which in turn can result a variety of cancers, collectively known as Lynch Syndrome.”

A pair of proteins known as MutS and MutL work together to initiate repair of these mismatches. MutS slides along the newly created side of the DNA strand after it’s replicated, proofreading it. When it finds a mismatch, it locks into place at the site of the error and recruits MutL to come and join it. MutL marks the newly formed DNA strand as defective and signals a different protein to gobble up the portion of the DNA containing the error. Then the nucleotide matching starts over, filling the gap again. The entire process reduces replication errors around a thousand-fold, serving as one of our body’s best defenses against genetic mutations that can lead to cancer.

“We know that MutS and MutL find, bind, and recruit repair proteins to DNA,” says biophysicist Keith Weninger, university faculty scholar at NC State and co-corresponding author of the work. “But one question remained – do MutS and MutL move from the mismatch during the repair recruiting process, or stay where they are?”

In two separate papers appearing in Proceedings of the National Academy of Sciences, Weninger and Erie looked at both human and bacterial DNA to gain a clearer temporal and structural picture of what happens when MutS and MutL engage in mismatch repair.

Using both fluorescent and non-flourescent imaging techniques, including atomic force microscopy, optical spectroscopy and tethered particle motion, the researchers found that MutL “freezes” MutS in place at the site of the mismatch, forming a stable complex that stays in that vicinity until repair can take place. The complex appears to reel in the DNA around the mismatch as well, marking and protecting the DNA region until repair can occur.

“Due to the mobility of these proteins, current thinking envisioned MutS and MutL sliding freely along the mismatched strand, rather than stopping,” Weninger says. “This work demonstrates that the process is different than previously thought.”

“Additionally, the complex’s interaction with the strand effectively stops any other processes until repair takes place. So the defective DNA strand cannot be repacked into a chromosome and then carried forward through cell division.”

Published: June 24, 2020 in Proceedings of the National Academy of Sciences

Abstract: DNA mismatch repair (MMR) corrects errors that occur during DNA replication. In humans, mutations in the proteins MutSα and MutLα that initiate MMR cause Lynch syndrome, the most common hereditary cancer. MutSα surveilles the DNA and, upon recognition of a replication error, it undergoes ATP-dependent conformational changes and recruits MutLα. Subsequently, PCNA Q:8 activates MutLα to nick the error-containing strand to allow excision and resynthesis. The structure–function properties of these obligate MutSα–MutLα complexes remain mostly unexplored in higher eukaryotes, and models are predominately based on studies of prokaryotic proteins. Here, we utilize atomic force microscopy (AFM) coupled with other methods to reveal time- and concentration-dependent stoichiometries and conformations of assembling human MutSα–MutLα–DNA complexes. We find that they assemble into multimeric complexes comprising three to eight proteins around a mismatch on DNA. On the timescale of a few minutes, these complexes rearrange, folding and compacting the DNA. These observations contrast with dominant models of MMR initiation that envision diffusive MutS–MutL complexes that move away from the mismatch. Our results suggest MutSα localizes MutLα near the mismatch and promotes DNA configurations that could enhance MMR efficiency by facilitating MutLα nicking the DNA at multiple sites around the mismatch. In addition, such complexes may also protect the mismatch region from nucleosome reassembly until repair occurs, and they could potentially remodel adjacent nucleosomes.

Published: Online the week of July 13, 2020 in Proceedings of the National Academy of Sciences

Abstract:
DNA mismatch repair (MMR), the guardian of the genome, commences when MutS identifies a mismatch and recruits MutL to nick the error-containing strand, allowing excision and DNA resynthesis. Dominant MMR models posit that after mismatch recognition, ATP converts MutS to a hydrolysis-independent, diffusive mobile clamp that no longer recognizes the mismatch. Little is known about the post-recognition MutS mobile clamp and its interactions with MutL. Two disparate frameworks have been proposed: one in which MutS-MutL complexes remain mobile on the DNA, and one in which MutL stops MutS movement. Here we use single molecule FRET (smFRET) to follow the post-recognition state(s) of MutS and the impact of MutL on its properties. In contrast to current thinking, we find that after the initial mobile clamp formation event, MutS undergoes frequent cycles of mismatch rebinding and mobile clamp reformation without releasing DNA. Notably, ATP hydrolysis is required to alter the conformation of MutS such that it can recognize the mismatch again instead of bypassing it; thus, ATP hydrolysis licenses the MutS mobile clamp to rebind the mismatch. Moreover, interaction with MutL can both trap MutS at the mismatch en route to mobile clamp formation and stop movement of the mobile clamp on DNA. MutS’s frequent rebinding of the mismatch, which increases its residence time in the vicinity of the mismatch, coupled with MutL’s ability to trap MutS should increase the probability that MutS-MutL MMR initiation complexes localize near the mismatch.