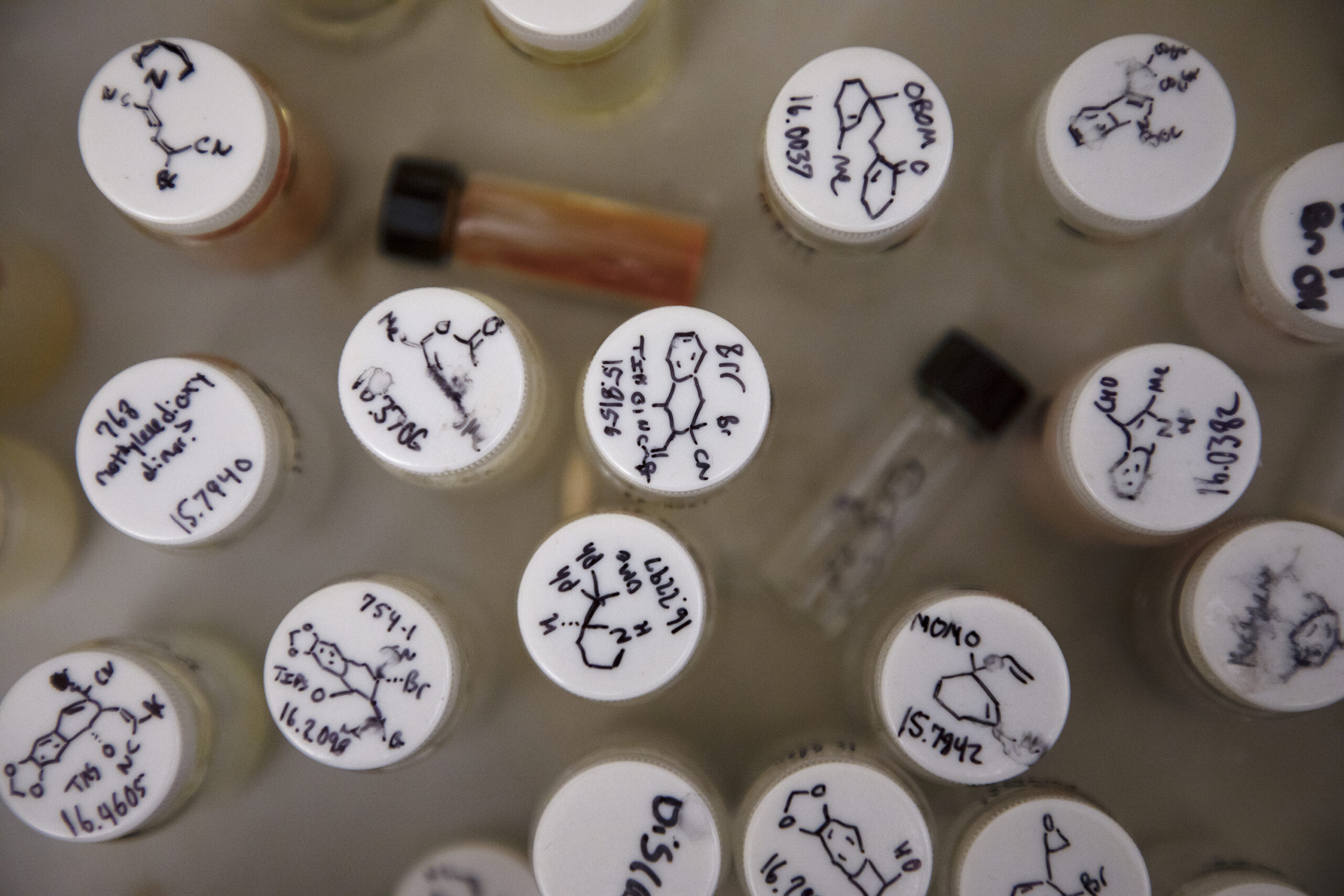 Traditional medicines have relied on the healing properties of plants, bacteria, marine sponges, and other natural resources for years. The health benefits of these plants were originally reinforced when people realized they could lessen their symptoms. The evolution of science soon revealed the complex compounds, reactions, and fascinating molecular structures that give them their drug-like properties: bark from willow trees provided the active ingredient in aspirin, poppies led the way for morphine, and the pacific yew helped develop Taxol, a chemotherapy created next door at Research Triangle Park. 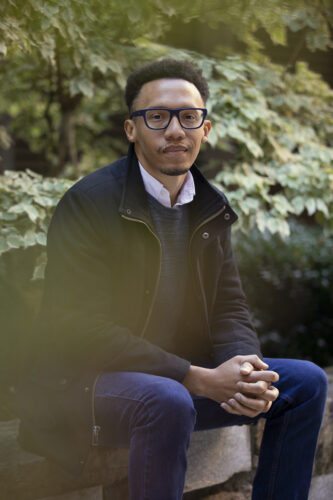 Organic chemist Sidney Wilkerson-Hill studies ways to make molecules that occur in nature in order to advance drug development. (photo by Megan May)

Chemistry inspired by nature has long been considered a potential gateway to discovering breakthrough medicines. That’s where organic chemistry synthesis labs like Sidney Wilkerson-Hill’s come in.

More specifically, his lab explores ways to make cyclopropanes — molecules with triangular structures of carbon and hydrogen — that occur in nature. A colorless gas that smells like petroleum, cyclopropanes have been used in medicine since 1934, mainly as a general anesthetic. When attached to larger molecules, like the ones used in drug development, cyclopropanes create a lubricant that helps the drugs cross cell membranes more easily.

Without the foundational discoveries made in synthesis labs like Wilkerson-Hill’s, scientists and pharmaceutical companies wouldn’t be able to make discoveries and improvements to medicine and human health.

“If we could do every reaction that nature does right now, we would have no purpose for organic chemistry,” Wilkerson-Hill says. “We have to know what we can and can’t do. If you don’t have that body of knowledge, then you can’t really solve problems.”

Raised in Kinston, Wilkerson-Hill first became interested in science from watching cartoons like “Dexter’s Laboratory.” He never considered it as an actual career possibility until he needed extra credit in his high school Earth science class. That meant participating in his local Science Olympiad, a tournament where K-12 students compete to display their knowledge and skill in various scientific fields.

“I just kind of rocked all the chemistry events,” Wilkerson-Hill says. “It turns out, the state director [of Science Olympiad] at the time was in Kinston and saw me winning all these chemistry events. So, he was like: ‘Hey, what are you going to do with your life?’”

Though Wilkerson-Hill had planned to join the military, following in the footsteps of many of his family members, the director was adamant he consider college. Ultimately, he enrolled at NC State University, where he majored in chemistry — specifically polymer and color chemistry — before going on to the University of California, Berkley for his PhD.

Throughout his graduate and postdoctoral studies, Wilkerson-Hill researched how cyclopropanes are synthesized by various catalysts. His love for North Carolina brought him back to the state where he and his research team are continuing to investigate the motif — how the atoms are arranged — and its potential applications at UNC.

“You have to pick the molecules that interest and excite you,” Wilkerson-Hill says. “I typically go for the ones that are most challenging because there’s sort of an art to building them.”

In nature, cyclopropanes are created when trees release compounds like isoprene. As these compounds meet with enzymes found within the cells of plants, subsequent chemical reactions create a string of carbon and hydrogen molecules that fold to form an unusual triangle-ring structure.

Six hydrogen molecules bonded to a small ring of three carbon molecules creates a lot of potential energy — and strain — on the structure, making it prone to bursting. The strange composition of cyclopropanes means nature has to expend more energy to make them, something Wilkerson-Hill finds intriguing. With no way to recreate cyclopropanation in the lab exactly as it happens in nature, he and his team of organic chemists must develop their own tools to find another way of synthesizing the enigmatic structure.

“It’s like building a skyscraper,” Wilkerson-Hill says. “Nature has all these sophisticated tools like a crane, a jackhammer, and power tools, but we just have a hammer and some nails.”

To start, they place specific reactive chemicals into a flask and add a transition metal, like palladium or rhodium, which acts as a catalyst to make the reaction occur. Once the catalyst is added, the chemical structure of the mixture begins to change, forming a new molecule that hopefully includes a cyclopropane. While there are other ways to create cyclopropanes in the lab, Wilkerson-Hill believes this approach could open the door to using molecules for drug synthesis that scientists couldn’t access before. 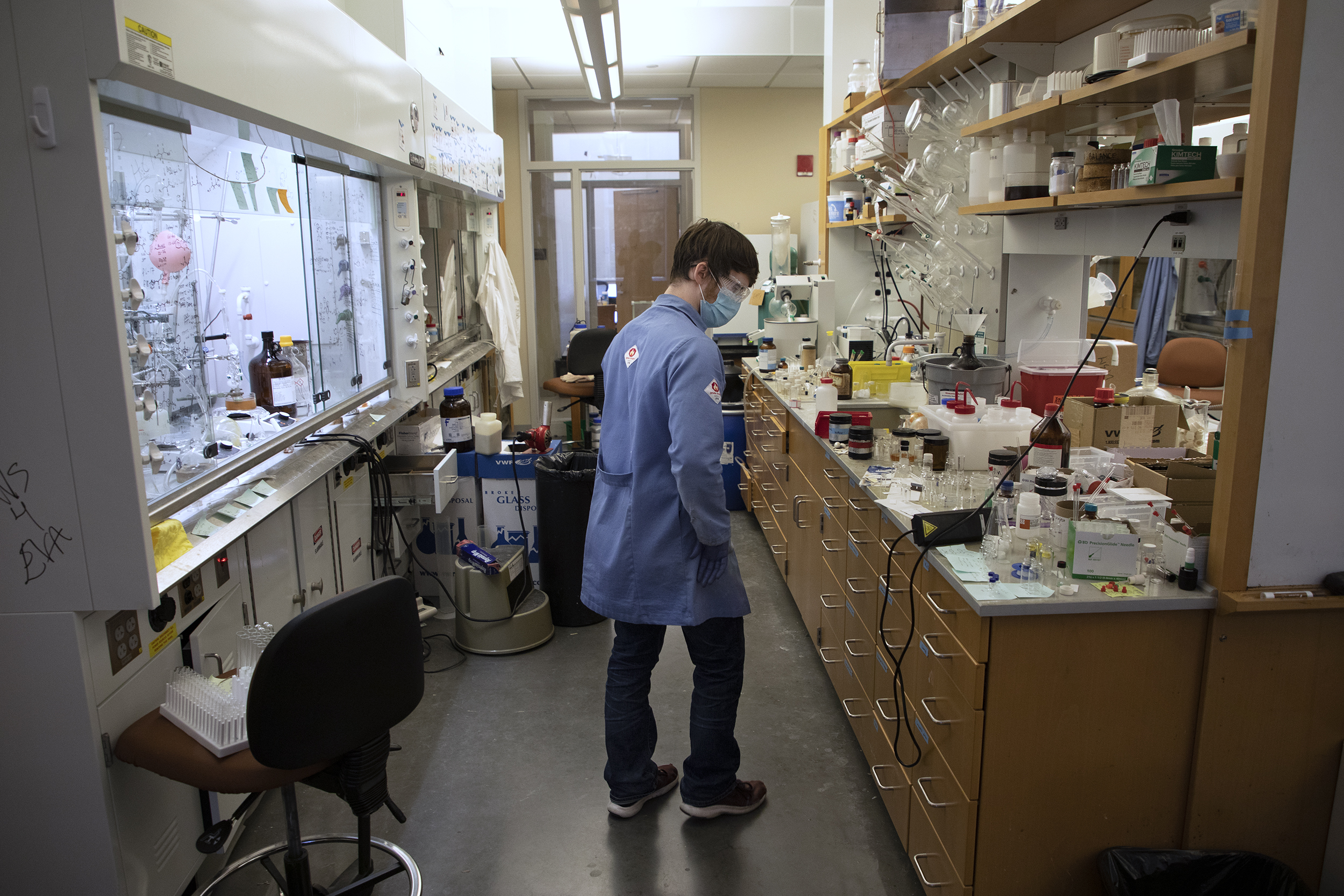 If these resulting molecules were to be isolated from a plant rather than synthesized in a lab, it would be incredibly inefficient, producing only enough of the compound to perform single-cell studies. This would prevent a detailed investigation and understanding of molecular properties that may be vital in creating the best drug possible.

Currently, Wilkerson-Hill and his lab have shown that their reaction does work and creates a combined molecule with a cyclopropane attached. Because the structure is so unstable, though, it breaks apart rather than reengaging to keep the cyclopropane in place. To find the right balance to stabilize the molecule, the group is experimenting with several variables such as different transition metals, temperature, and how long it takes the reaction to occur.

Wilkerson-Hill’s lab experiments with molecules beyond cyclopropanes. Adam Zahara is a third-year graduate student working with postdoctoral researcher Elsa Hinds to make compounds more efficiently. Zahara and Hinds are focusing on experimenting with different transition metals in an attempt to make the process simpler, more efficient, and utilize less expensive metal catalysts. This might, according to Zahara, allow pharmaceutical companies to offer life-changing drugs at a lower price point.

“Science does not need to be profitable,” Zahara stresses. While industry labs may have to chase experiments that are more likely to provide their company with money, he says, academic labs have more freedom to pursue ideas that have less immediate but equally important results.

With any discipline, there’s theory and then there’s practice. Moving from learning how things are supposed to work to then pushing the boundaries of theory in the name of discovery is challenging — but necessary — work.

You can read all the books you’re supposed to and know how things should work, but everything changes when you apply that knowledge to experiments in the lab. While Wilkerson-Hill believes no experiment is really a failure, as they all teach us something, he says that going into the lab day after day to work on an experiment that isn’t yielding the results he and his researchers want can be mentally taxing.

“It’s like going through the scientific method every single day,” he says. “And it might take two or three months before you get that positive result.”

Organic chemistry synthesis may be a grueling and frustratingly slow enterprise, but the doors it opens are worth it to Wilkerson-Hill.

“Discovery is amazing,” he says. “You may discover something you think is irrelevant, but then 15 or 20 years later you find out it’s the next big thing. It’s absolutely thrilling to connect the dots over time.”

Sidney Wilkerson-Hill is an assistant professor in the Department of Chemistry within the UNC College of Arts & Sciences.

Adam Zahara is third-year graduate student in the Department of Chemistry within the UNC College of Arts & Sciences.

Elsa Hinds is a postdoctoral researcher in the Department of Chemistry within the UNC College of Arts & Sciences.