Q&A with Frank Leibfarth: Of placekicking, polymers and pets 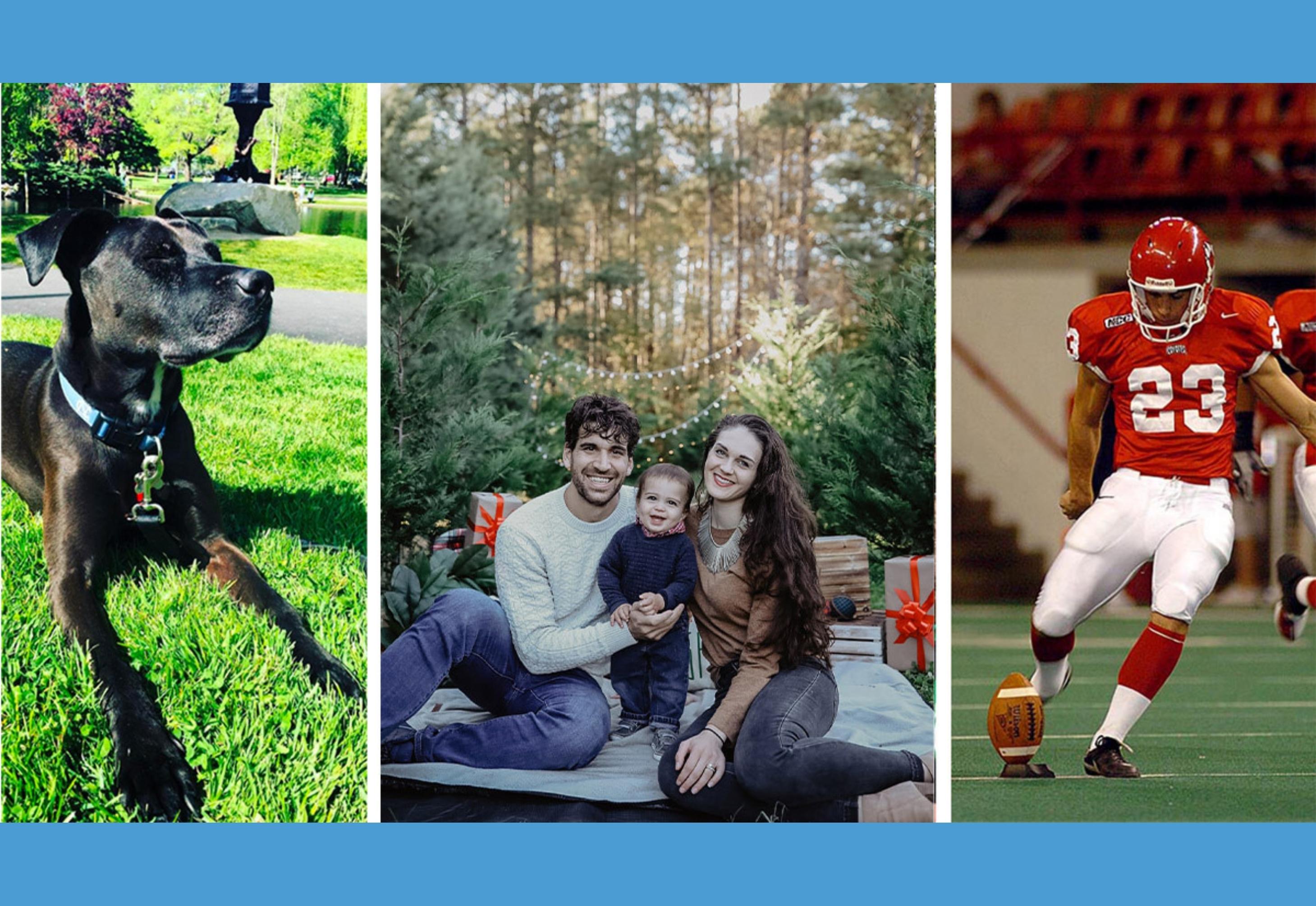 If the number 23 means anything, and it certainly does to the Carolina Blue loyal, then Frank Leibfarth was destined to address graduates at the University’s Winter Commencement on Dec. 12.

The Carolina chemistry professor was a college football placekicker whose jersey number was 23, the number that Tar Heel basketball player Michael Jordan wore while scoring and soaring.

Leibfarth is soaring in the discipline of chemistry as an innovative, award-winning researcher and teacher. His lab, the Leibfarth Group, focuses on new ways to develop synthetic polymers, commonly known as plastics.

For instance, Leibfarth’s lab and UNC-Chapel Hill environmental engineer Orlando Coronell developed a filtration resin that removes per- and polyfluoroalkyl substances — chemicals known as PFAS — from drinking water. PFAS created through production of different commercial products are in water sources worldwide. PFAS that dissolve in water are the highest concern as they have been proven to affect human health adversely, said Leibfarth.

Along with questions about his research, Leibfarth talked with The Well about football, family, teaching and more.

How did you come to wear 23 at the University of South Dakota, where you were an Academic-All American and the career scoring leader at one time?

I grew up in Michael Jordan’s heyday, but the story is less interesting. It was just the kicker’s number at USD, so anybody who got the starting role would take that number. We had a potent offense during that time, so I got to kick a lot of field goals and extra points.

Did you watch your Coyotes beat arch-rival South Dakota State this season on a last-second 57-yard pass?

I pulled it up on my computer on the kitchen table in the fourth quarter while trying to watch my 2-year-old. It was one of those games where they just kept making mistakes in the last three minutes. I got so frustrated and was about to turn it off, then there’s this crazy play.  (Speaking of 2-year-old Lawrence, The Well recommends watching his prediction below of who will win a 2020 Nobel Prize for Chemistry.)

Dinnertime conversation at our house included Lawrence’s predictions for the upcoming #ChemNobel. If he has his way, @CarolynBertozzi will be getting a call late tonight! pic.twitter.com/RJN1jmtZSd

You grew up in Yankton, South Dakota, with a population of around 14,000. How did you leave there to play college football?

I grew up playing soccer. In my high school freshman PE class, we were going through the football unit. The teacher saw me kick and said, “Whoa, do that again.” He was head football coach and he asked, “Have you thought about playing football?” I did and was recruited to South Dakota State and South Dakota. Neither of my parents got a four-year degree, and I wasn’t savvy about the whole college thing. I always did well in school. I think coaches wanted me to come play because I was a decent kicker, but also they could get me academic scholarships and didn’t have to use a football scholarship.

Yankton was a great place to grow up. I have one sibling. My sister is four years younger. My mom was a nurse and my dad was a truck driver, mostly local. He would usually stay over one night a week hauling different things. They recently moved from Yankton to Omaha, Nebraska, where my sister settled. My parents wanted to be closer to her, then she had one of the grandchildren, so they were motivated to be near her.

Why do colleagues refer to you as fearless?

Part of that comes from athletics, especially the position I played in football. I had to be willing to walk out in front of everybody and be willing to miss a game-winning field goal before I ever had a chance of making one.

I didn’t play for the first couple of years because a really good player was ahead of me and because I just wasn’t ready. I was more scared of failing than I was willing to risk failure in pursuit of success.

I remember one time bugging my coach about something. He turned to me and said, “Frank, stop worrying so much and just play.” I was in my own head. I got over it and that allowed me to succeed athletically, and I started implementing that in other parts of my life.

In college, I got an opportunity to move to New York City and do research at Columbia University. I took that leap from a small town, dove in and was willing to see what would happen. I also spent another summer at Stanford. They were National Science Foundation-sponsored research experiences for undergraduates. I owe a lot of my career to those. I didn’t know what a scientist with a Ph.D. could do, but those NSF programs taught me what it meant to be a scientist, how to go to graduate school, how to apply and get a Ph.D.

At what point did you decide to focus on polymers? At Columbia, we made what were essentially electronic circuits, but out of really small molecules, of an order of magnitude smaller than the latest Intel chip in your computer. I wasn’t holding something in my hand, but intellectually I recognized that this thing is in my computer.  Then I understood how it applied to my computer and my phone. These things mattered. I didn’t realize that chemistry could solve those problems.

Tell me about your water purification work.

How we started that project embodies fearlessness because it’s not something I had planned to work on when I came to Carolina. A representative from the NC Policy Collaboratory came to a faculty meeting and said that the collaboratory represents the state’s interests to the General Assembly and that they were looking for creative solutions for three problems. One was PFAS remediation.

I’d never worked in water purification and didn’t know much about it, but I have expertise in polymer chemistry. As a young faculty member, usually you’re encouraged to stay in your lane, establish your program so you can get tenure. You’re often mentored to take a conservative outlook, but I saw this opportunity and we came up with a clever idea, inspired by diapers. I thought, If you need to take something out of water, what absorbs a lot of one particular thing? And I recognized that diapers absorb a lot of water. I looked at how structurally those polymers are put together to have that function and then tried to apply it to PFAS. We started with this naive idea that quickly worked well.

After about a year and a half, we patented it and published a paper. Then, as science always starts fun and curious, we recognized, This was fun, but PFAS are a real problem, and if we have the opportunity to keep developing this as a solution, we’re obligated to do so. We started the project and dove into an area that we’re not familiar with in a time in my career when people are telling me, “Stay in your lane.” That may be one reason my chair calls me fearless.

What’s it like to teach, work with and mentor Carolina undergraduate and graduate students?

My first student was an undergrad, Brittany Smith. She helped me start the lab. There are always two or three undergraduates working in the lab. Three undergraduate students — Yaman Pekssenar, Shefali Gandai and Bradley Wilhelmy — who worked in Leibfarth’s lab join him at a 2018 research symposium at Carolina.

The goals differ for undergraduates and graduate students. With graduate students, my favorite part is seeing them go from Year One, where they’re trying to find themselves in this broader field. There’s always this time in Year One where they’re completely overwhelmed by the magnitude of what they have to learn, and I help them through that. Then seeing them at Year Five, when they’re getting their Ph.D.s and they’ve gotten awesome jobs, is most fulfilling for me. I enjoy playing some small part in them being able to achieve their goals and go from a new student to a full-fledged doctor in chemistry who becomes my colleague.

I teach undergraduates every year. A joy and excitement comes out of relating something in chemistry back to their real life. I like seeing the connection they make to chemistry when they realize, Oh, that’s important and affects what I do daily. Now I’m motivated to learn more because this isn’t just like a class I’m required to take.

Your lab website stresses four rules — get better every day, work smarter, be safe, have fun — and includes humorous bios of lab members and their pets. Why humanize what you do?

Broseidon the fish was the first pet featured. I guess it came out naturally. When the lab started, there were five of us. We were really close-knit. Everybody in that group had a pet, and I included my dog, Roscoe.

A goal was to show the lab’s personality beyond being scientists. Graduate students spend five years here. This is their only job. It’s a long time. You have to be a human, a whole person during this time, so anything that we can incorporate into the culture helps.

Is Roscoe still with us?

Roscoe is still hanging on. He’s over 13. He’s a 60-pound dog. My wife and I got him when I was getting my Ph.D. in Santa Barbara. He’s slowed down, but he still acts like a puppy. Roscoe the rescue puppy and his bestie shortly after joining the Leibfarth family.