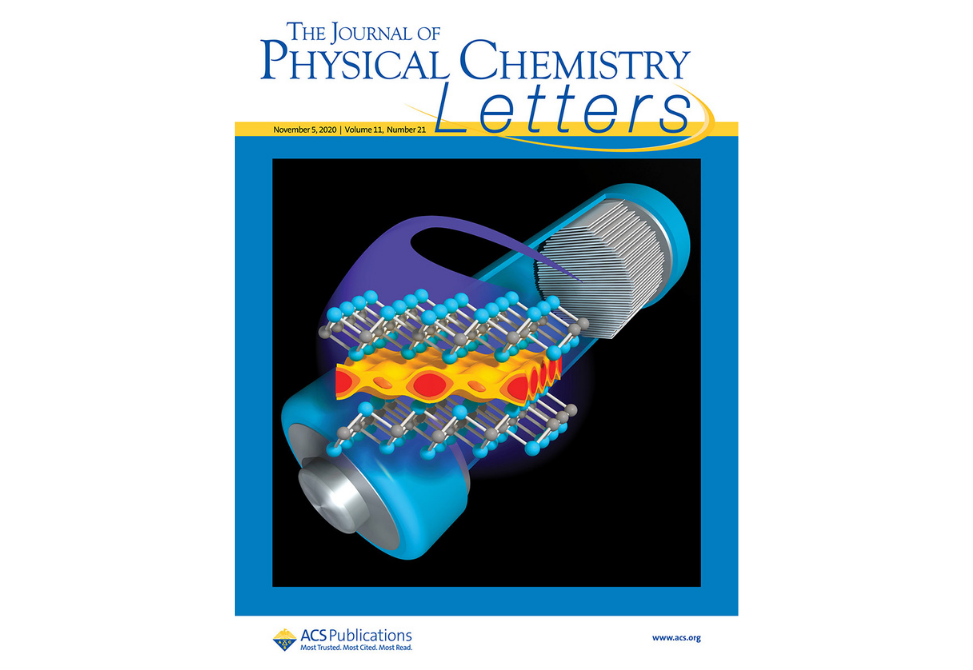 The Warren lab's research publication was featured on the cover of The Journal of Physical Chemistry Letters.

The Warren Lab published a manuscript in the Journal of the Physical Chemistry Letters that reports a fundamentally new concept in electrochemistry: the transfer of electrons without reduction or oxidation.  The manuscript is featured on the cover of the journal and is described in a news article in Chemistry World (web link forthcoming), a magazine of the Royal Society of Chemistry.

Prof. Warren’s Q&A with Chemistry World is provided below:

Q: What’s the main novelty of this work compared with what’s been understood before?

A: There’s a few points of novelty.

First, in the scope of batteries, we’re reporting some fairly high-performance materials.  But more unusual than the high performance is that the batteries do not use lithium ions – instead, they use fluoride ions.  The use of fluoride hasn’t been explored much, and so there’s lots of opportunities to potentially discover high-performing battery materials.

So, how is our battery different?  The battery is not made of just atoms.  Our battery has locations within the material that hold only electrons and no atoms.  These materials have actually been known for a long time.  They’re called electrides.  Imagine, for example, starting with the salt sodium chloride.  But then remove every chloride ion.  Well, that material wouldn’t be stable, because it would be made of just positively charged sodium ions.  (The positively charged ions would repel.)  But what if you could place an electron into each site that once held a chloride?  The electron might behave similarly to the chloride ion and, because of its negative charge, would hold the sodium ions together.  Now, sodium chloride cannot actually lose all of its chloride ions to form an electride.  We hypothesized, however, that there might be some.  One of the materials that we’ve discovered is Y2CF2, which can lose its fluoride ions to become [Y2C]2+(e–)2, where the two electrons have replaced the two fluoride ions.  Thus, with a battery electrode that has both atoms and electrons, we can lose electrons during the battery’s discharge process, but the atoms within the material do not become oxidized or reduced.  This is truly weird—but exciting.  This may be the first example of electron transfer without reduction or oxidation—i.e., without the atoms changing their charge.

Q: What problem were you trying to solve or what led you to investigate this?

A: When I (Scott) was a post-doc eight years ago, I was working on nanoparticles that charge and discharge, sort of like a battery.  I observed some strange charging/discharging behavior and, in seeking to explain the behavior, I began to learn about electrides.  I developed a model that suggested the nanoparticles could lose their ions and that electrons would directly replace them.  But once my lab began at UNC Chapel Hill, we found that the explanation was wrong.  The observations were actually due to something much less interesting: the corrosion of the nanoparticles.  However, what remained from this apparent dead-end was an idea: that, given the right material, ions could change locations with electrons without reduction or oxidation. Thus, here at UNC, we began to explore this system both experimentally and computationally, and that led to the results we have now just published. This project has taken an enormous amount of effort over eight years and involved lots of trial and error.  The biggest credit goes to my students Dan Druffel, Jacob Pawlik, Jack Sundberg, Lauren McRae, and Matthew Lanetti for their hard work and persistence to find an electrode material that would show electron transfer without reduction or oxidation.

Q: Why is redox-less ion insertion/deinsertion beneficial to a battery system?

A: There are a number of benefits.  In a typical battery, such as a lithium ion battery, the process of charging and discharging causes batteries to shrink and grow in volume.  For example, the electrodes in an iPhone shrink and expand by up to 30%.  (They are enclosed in a hard container, so you don’t typically notice this expansion.)  Over time, the change in volume causes the electrodes to crack, and these cracks lower the battery’s capacity.  This is why batteries fade in performance over time.  Our materials are different.  In our materials, there is almost no change in volume.  This is a direct consequence of redox-less ion insertion/deinsertion.  Because an electron swaps with a fluoride, and because the electron happens to be the same size as the fluoride, the material doesn’t hardly change volume!  This suggests that cracking and capacity loss will not occur to the same extent in our new materials.

A second advantage is the charge storage capacity of our batteries.  The best battery system we report has double the capacity of current commercial lithium-ion batteries.  For example, converting Y2C to Y2CF2, we are storing two fluoride ions for every 3 host atoms.  In lithium, however, state-of-the-art systems convert CoO2 to LiCoO2, thus storing just one lithium for every three host atoms.  This is why our capacity of our batteries is roughly double that of lithium-ion batteries.  And this is why it is all the more surprising that the volume doesn’t change:  we increase the number of atoms in the electrode by 66%.

Q: Can you explain in simple language what you did to discover this phenomenon?

A: Lots and lots of trial and error on the part of my students, Dan Druffel, Jacob Pawlik, Jack Sundberg, Lauren McRae, and Matthew Lanetti.  They’ve been persistent in trying to discover this behavior, both in terms of experiments and computation.  Right now, our most important experiments have been actually building electrodes to understand how the materials gain and lose fluoride ions.  And our most important calculations have been studying how ions and electrons move in these materials.  These calculations are what we just published, and they give the clearest evidence that ions do, in fact, exchange positions with electrons to give electron transfer without reduction or oxidation.

Q: How did you feel when you made this observation for the first time of ion exchange without redox? What is expected or was it a complete surprise?

A: We were absolutely excited!  It has been an eight-year journey from the initial concept to achieving our current results.

Q: Why is it normally the case that the gain or loss of electrons in a material must be accompanied by the reduction or oxidation of its atoms?

Q: Can you explain how this exception to the rule that you discovered achieves ion exchange without redox?

Q: Why is it desirable to develop batteries that shuttle anions instead of cations? What benefits would this have over existing batteries?

Q: What are your hopes for this and what direction are you working towards now?

A: We are building on this discovery to find more high-performance materials that can store anions.  We are focused on understanding these materials using the tools of electrochemistry and materials science to understand what their true limitations are.  And we’re also focused on the high-throughput discovery of additional electrode materials.