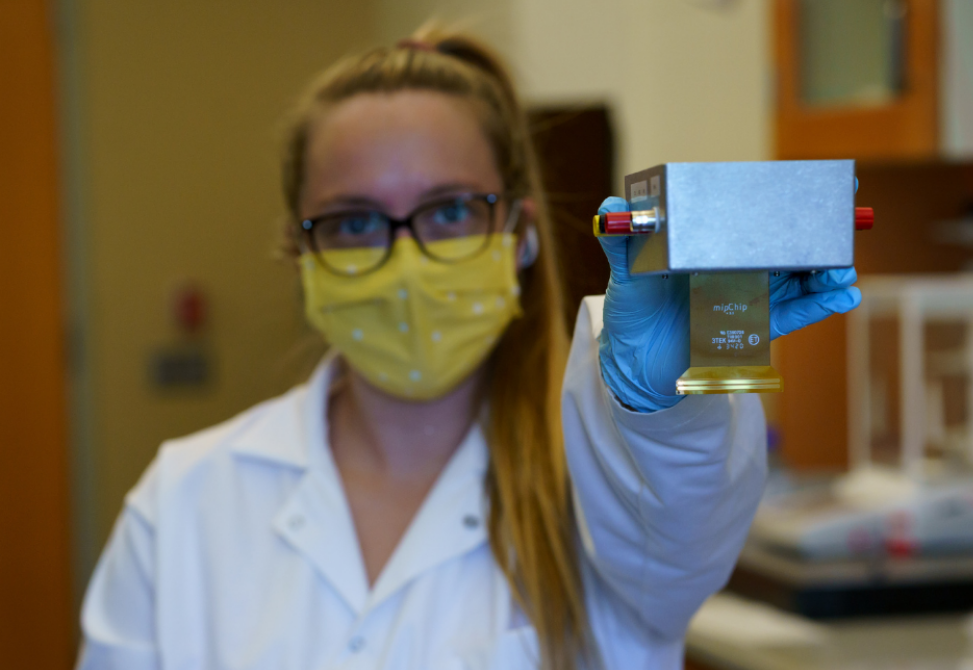 Per- and polyfluoroalkyl substances, also known as PFAS, are synthetic chemicals that leave detrimental impacts on the environment and on human health. They are found in common household products like Teflon coated cookware, food packaging and water-repellent goods. The byproduct of manufactured goods containing PFAS has been found in large bodies of water like the Cape Fear River in North Carolina, which also happens to be a source of water for human use. These chemicals are often referred to as “forever chemicals” because of their inability to break down; thus, leaving “forever” consequences. Led by Jeffrey Dick, assistant professor of chemistry, the Dick Research Group has been exploring ways to develop deployable technology to detect PFAS.

Currently, to detect PFAS, samples of water are submitted to a centralized facility. The process to obtain results can be time-consuming and costly. The delay between submission, testing and identifying materials in the sample is not sufficient in solving a problem so expansive on the environment and human health. The Dick Research Group plans to produce a device that is reusable, cost-effective and easily available to the end consumer.

Rebecca Clark, a second-year doctoral student in the Group, is focused on conducting research on how a molecularly imprinted polymer chip, known as a MIPchip, can be used in the detection of perfluorooctanesulfonic acid, also known as PFOS, a compound that is part of the larger PFAS family of chemicals.

“Our goal is to create a deployable sensing strategy that can be used in the environment. A user can simply place the sensor in the water, and they will be able to view rapid results. That can help tremendously with remediation efforts,” explains Clark.

The MIPchip (pictured left) is a device that contains a series of macroelectrodes, which is the component used to detect PFOS. Electrodes are conductors that act as a method of transportation for electrical currents. They can be made of metals like stainless steel, copper or gold. The macroelectrodes on the Group’s MIPchip device are made of gold, a durable material with properties such as a high rate of conductivity and the ability to withstand tarnishing, making it ideal for detection of PFOS. To receive electrical energy, the MIPchip is plugged into a potentiostat, an electronic device capable of controlling electrical conduction to run an experiment. The results of the experiment are viewable through an application located on a device, such as a laptop or mobile phone. The potential, or voltage, generated by the potentiostat triggers each macroelectrode on the MIPchip to sequentially take measurements of the type and amount of material, such as PFOS, found in a water sample.

In the lab, Clark is focused on optimizing the effectiveness of the MIPchip. To test the accuracy of detection, she first obtains several samples of water from similar areas located in a body of water. She then submerges the latter half of the device into each water sample, using a known uncontaminated sample as the control variable. PFOS contamination is detected when the compound binds to the surface of the polymer-coated macroelectrodes and interacts with the electrode. The binding process resembles that of placing a puzzle in its correct spot. Each electrode contains a molecular imprint of the PFOS compound. When oxygen is blocked, the current through the electrode drops. The magnitude of the drop in current depends on the concentration of PFOS compounds in the water. Clark is also focused on optimizing selectivity, which is the ability of the device to withstand or ignore other particles often present in river water. Some of these particles may include humic acid and sodium chloride, which may fit into the original imprint of the PFOS compound.

Thus far, the Dick Research Group has successfully demonstrated the ability to detect PFAS in unmodified river water. They will continue to conduct research on the efficacy of the device. They plan to collaborate with those in the engineering and programming fields to improve on the physical properties of the MIPchip, like its durability when suspended in various bodies of water. Ultimately, the Group hopes to produce a device that will be easily deployable, environmentally friendly and cost-effective. In return, their research has the potential to make a lasting impact on the environment and on human health.