A world of possibility and promise—the pursuit of a Ph.D. and supporting the next generation of leaders 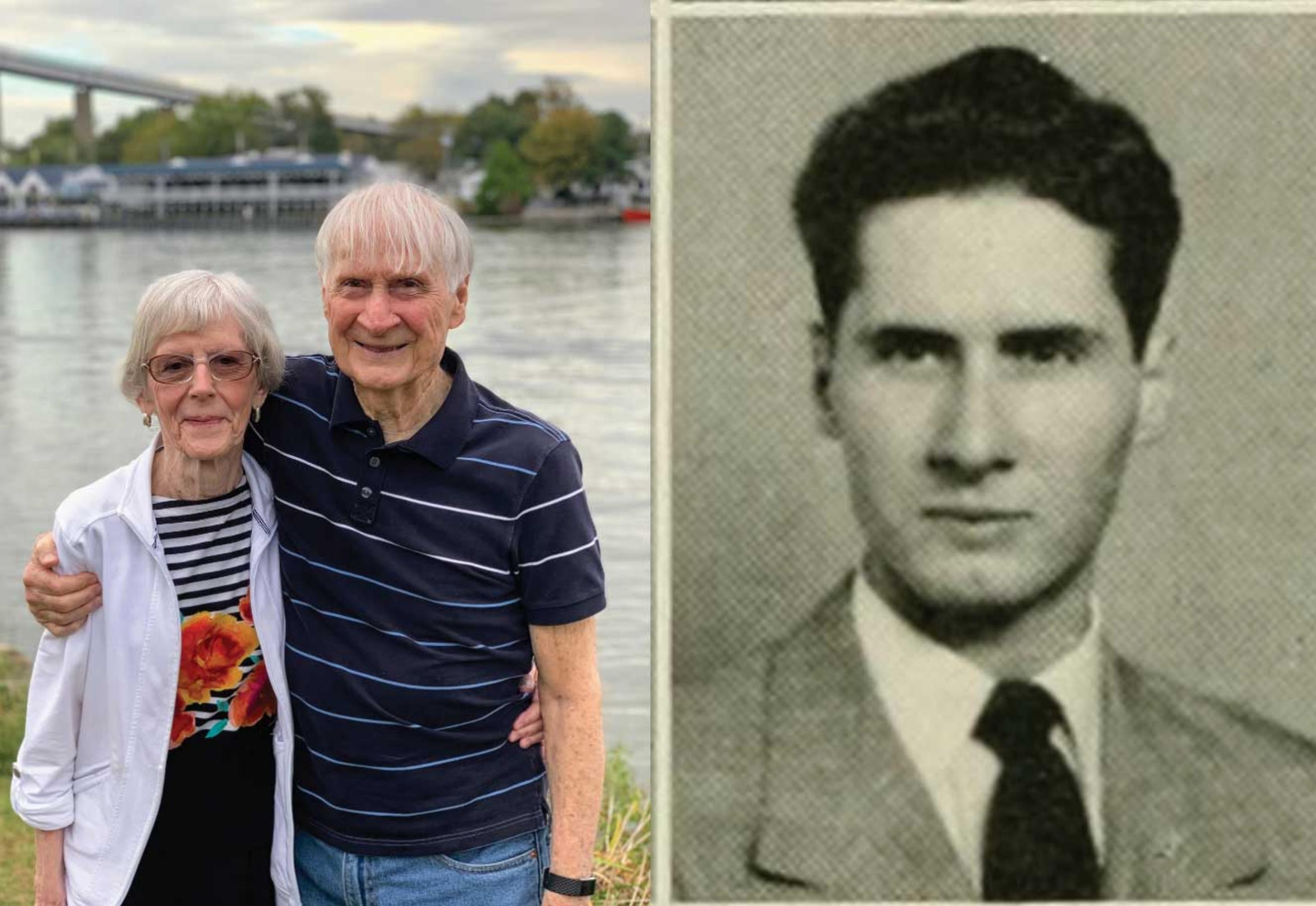 Roy and Mary Alice Smith alongside a photo of Roy Smith in 1952 when he was a junior at UNC-Chapel Hill. Smith later pursued a master’s degree and Ph.D. at Carolina.

At the close of his graduate career at UNC-Chapel Hill, Roy Smith ’52 (MA ’60; Ph.D. ‘63) recalled a torrential rainstorm at the close of an outdoor commencement ceremony, which sent thousands of graduates scurrying to find shelter.

“The rains came down right before the issuing of the diplomas,” Smith said. “There was a mad rush to dry off.” Unbeknownst to Smith, he lost his diploma in the melee, and he re-traced his steps in hopes of finding the elusive, but important, piece of paper.

“The next morning, I was so embarrassed,” Smith said. “There were papers all over the place. I walked to the graduate office the next morning, and here was this smiling young lady. She asked me if I had lost my diploma.” Someone had found it, turned it in to the graduate office; a good Samaritan wanted to make sure it returned to its rightful owner. For Smith, reared in Stanly County, North Carolina during the Great Depression, that piece of paper represented an accomplishment that, as a young boy picking cotton, Smith once thought to be impossible.

Smith described his hardscrabble youth: At 15, he received his driver’s license, and he began to work odd jobs to begin to pay for various needs and to save for advanced schooling. He worked as a school bus driver for a couple of years, working the 4:00 a.m. until noon shift. During the summer months, Smith recalled working in cotton mills and eventually saved enough money to attend a junior college, a step he felt it necessary to take before pursuing his bachelor’s degree at Carolina.

“In high school, I had very little mathematics, physics, chemistry, geometry,” Smith said. “I needed junior college before I applied to the university to give myself a chance to be competitive. … I chose science because I believe in science,” Smith said.

Smith returned to Carolina to pursue a master’s degree and Ph.D. largely funded by the benefits of the GI Bill, designed to support veterans who decided to pursue higher education. While Smith did not see combat, he served in the U.S. Army in its dental corps. That, combined with his Ph.D. from Carolina, led to a more than 25-year career in dental materials at Dentspoy Caulk.

Over the years, Smith recalled sitting around the kitchen table with his wife, Mary Alice, and discussing ways they could support the next generation of graduate students at Carolina. She died in early 2021 after nearly 50 years of marriage.

“It has been a goal that I’ve had for a long time,” Smith said. “She knew that it was my goal and that it was going to happen.”

Smith realized that goal by establishing the Roy and Mary Alice Smith Fellowship Endowed Fund through The Graduate School which will support future generations of students pursuing a graduate degree in chemistry.

“If it were not for the university, I would not be able to make this contribution at this point in time. It’s just as straightforward as that,” Smith said. “I’m proud of the work that I’ve been able to do,” Smith said. “It was always my goal to give something back; that fund will go in perpetuity, and that means so much.”

Smith said that pursuing his Ph.D. changed his worldview, opened a world of possibility and promise, and showed him the value of industrial research in the dental industry. The Department of Chemistry is part of the College of Arts & Sciences.

“I worked hard there,” Smith said. “I hopefully at least proved that even though my upbringing was not competitive with a lot of the students, even at that time, that I was able to hang in there.”

At the graduate student office, Smith was offered a newly printed graduate diploma to replace the one that was damaged in the storm. He declined the offer.

“It’s still framed with the little wrinkle in the corner,” Smith said. “And it’s in fine form. What can you say? It goes to show how many blessings I’ve had in this life.”