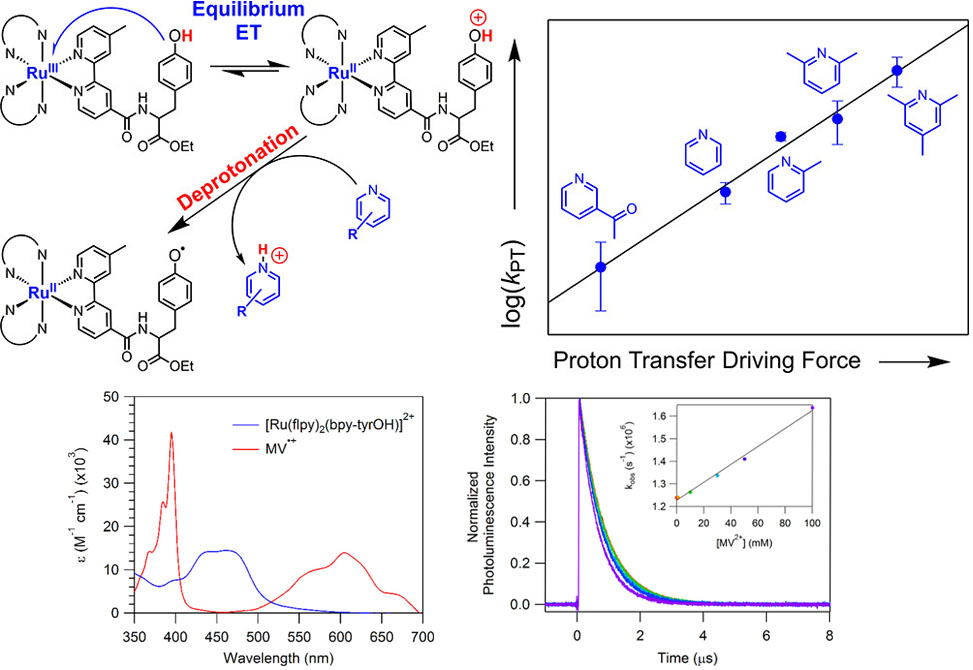 Chris Lennox, a fifth-year graduate student in the Dempsey Group, is first author on a paper published in the Journal of Physical Chemistry, in which he describes the synthesis of a polypyridyl ruthenium complex with fluorinated bipyridine ligands and a covalently bound tyrosine moiety. The paper details the investigation of the complex via transient absorption spectroscopy, and its photo-induced proton-coupled electron transfer, PCET, reactivity in acetonitrile. Using flash–quench methodology with methyl viologen as an oxidative quencher, a Ru3+ species is generated that is capable of initiating the intramolecular PCET oxidation of the tyrosine moiety.

Using a series of substituted pyridine bases, the reaction kinetics were found to vary as a function of proton acceptor concentration and identity, with no significant H/D kinetic isotope effect. Through analysis of the kinetics traces and comparison to a control complex without the tyrosine moiety, PCET reactivity was found to proceed through an equilibrium electron transfer followed by proton transfer, ET-PT, pathway in which irreversible deprotonation of the tyrosine radical cation shifts the ET equilibrium, conferring a base dependence on the reaction. Comprehensive kinetics modeling allowed for deconvolution of complex kinetics and determination of rate constants for each elementary step.

Across the five pyridine bases explored, spanning a range of 4.2 pKa units, a linear free-energy relationship was found for the proton transfer rate constant with a slope of 0.32. These findings highlight the influence that proton transfer driving force exerts on PCET reaction kinetics.