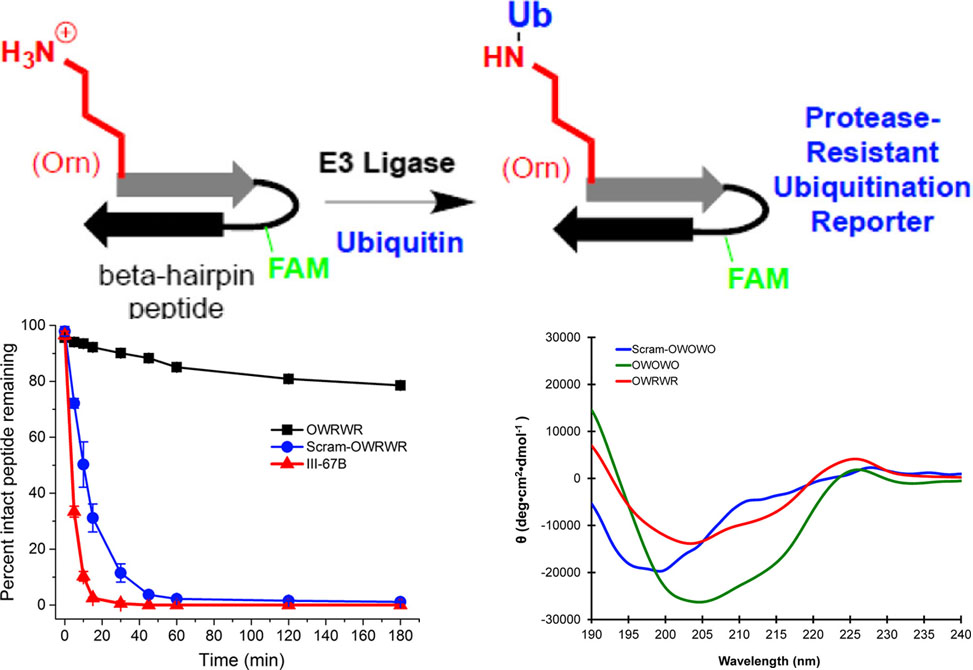 Regulation of the ubiquitin–proteasome, UPS, system to treat select types of cancer has become a popular area of drug discovery research. The FDA approval of proteasome inhibitors Bortezomib and Carfilzomib in the treatment of multiple myeloma has led to an increased need for chemical reporters capable of detecting and quantifying protein ubiquitination and the activity of members of the UPS including E3 ubiquitin ligases and the proteasome in the tumor cells of the patients.

One limitation of peptide-based reporters is their rapid degradation in the cellular environment by cytosolic peptidases. Conversely, β-hairpin "protectides" exhibit a pronounced secondary structure that significantly increases their lifetime under cellular conditions. The goal of a collaboration between the Allbritton and Waters groups, also involving researchers from North Carolina State University and Louisiana State University, published in ACS Omega, was to develop a family of novel, ornithine-rich protectides that could act as primary degrons serving as substrates for in vitro ubiquitination.

The fluorescent peptide-based reporters were demonstrated to be highly resistant to degradation in multiple myeloma cell lysates. The most stable β-hairpin primary degron, containing a single ornithine residue at the N-terminus, demonstrated rapid ubiquitination kinetics and a 20-fold increase in stability when compared with an unstructured primary degron. A screen of E1 and E3 enzyme inhibitors in cell lysates showed that ubiquitination of OWRWR was significantly impaired by inhibitors of the SCF family of E3 ligases. Furthermore, this is the first report demonstrating the use of an ornithine residue on a primary degron as a ubiquitination site.

This study serves as a strong foundation for the development of stable, fluorescent, peptide-based reporters capable of quantifying protein ubiquitination and the enzymatic activity of members of the UPS.