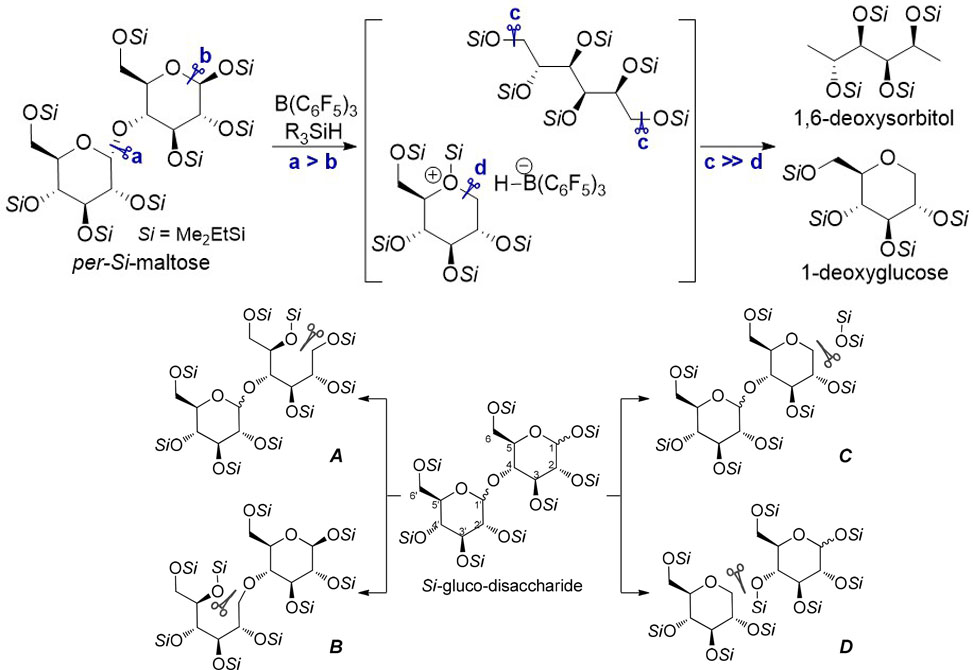 With an eye towards developing new catalytic chemistries for the conversion of cellulosic biomass into high value chemicals, researchers in the Gagné Group, published in ACS Catalysis, recently reported a catalyst system for the selective breakdown of disaccharides into useful chemicals. Specific cleavage sites for different sugars were discovered, and used to generate interesting partially oxygenated products.

The catalytic partial deoxygenation of the persilylated gluco-disaccharides maltose, cellobiose, trehalose, and isomaltose by Me2EtSiH and the Lewis acid catalyst B(C6F5)3 were examined to determine which C–O bonds are favorably removed.

In the case of maltose, cellobiose, and trehalose, the linking anomeric center is the kinetically preferred site of reduction and cleavage of the disaccharide occurs to yield 1-deoxyglucose and glucose as the primary products. Although 1-deoxyglucose is kinetically inert, glucose continues to reduce by ring opening to sorbitol and is eventually 1,6-deoxygenated to the corresponding tetraol.

Isomaltose differs from the other disaccharides in that it has an α–(1’ → 6) linkage, which is more resistant to cleavage and thus directs reactivity to a ring opening of the reducing sugar and the generation of isomaltitol.