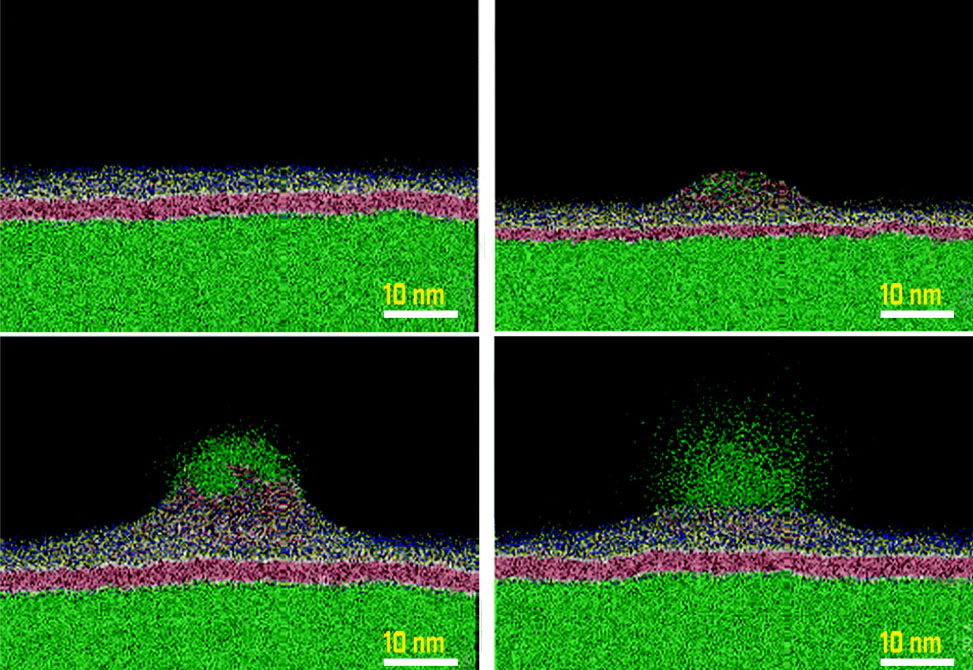 Collapse of bubbles, microscopic or nanoscopic, due to their interaction with the impinging pressure wave produces a jet of particles moving in the direction of the wave. If there is a surface nearby, the high-speed jet particles hit it, and as a result damage to the surface is produced. This cavitation effect is well known and intensely studied in case of microscopic sized bubbles. It can be quite damaging to materials, including biological tissues, but it can also be beneficial when controlled, like in case of sonoporation of biological membranes for the purpose of drug delivery.

In an article published in Physical Chemistry Chemical Physics, researchers in the Berkowitz Group consider recent simulation work performed to study collapse of nanobubbles exposed to shock waves, in order to understand the detailed mechanism of the cavitation induced damage to soft materials, such as biological membranes. They also discuss the connection of the cavitation effect with the traumatic brain injury caused by blasts. Specifically, the group members consider possible damage to model membranes containing lipid bilayers, bilayers with embedded ion channel proteins like the ones found in neural cells and also protein assemblies found in the tight junction of the blood brain barrier.

The research by the Berkowitz Group suggests that multiscale simulations will be combined with experimental techniques to study complex biological systems on a molecular level and will be used to determine ways to influence such systems, including finding cure for diseases. This is already happening as other researchers have described how experimental treatments can be combined with multiscale simulations to study the destruction of cancer cells by laser-induced shock waves.