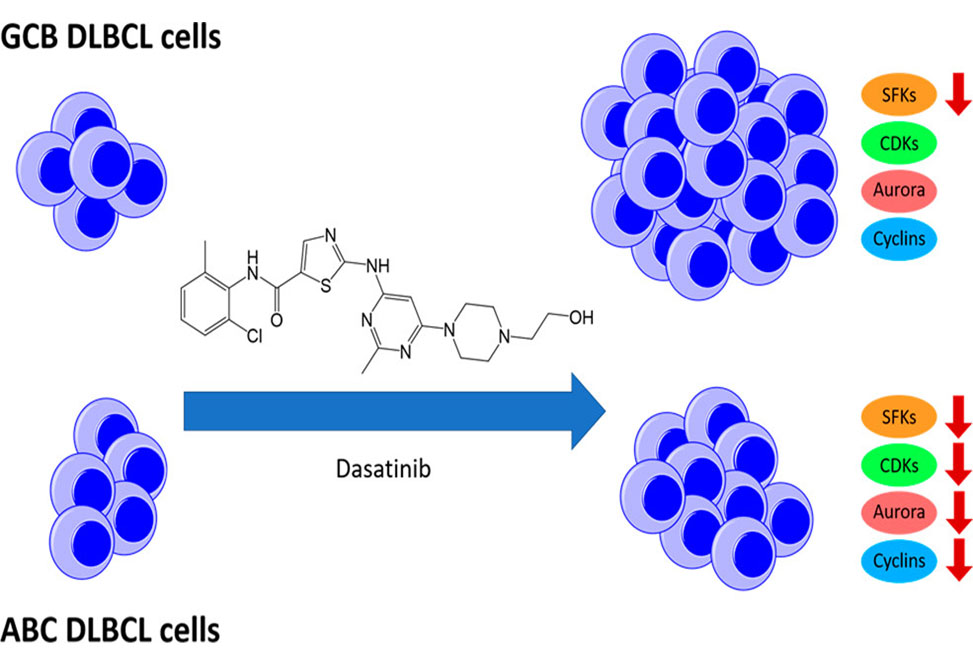 Diffuse large B-cell lymphoma, DLBCL, is a heterogeneous disease, and at least one-third of its patients relapse after treatment with the current chemotherapy regimen, R-CHOP. By gene-expression profiling, patients with DLBCL can be categorized into two clinically relevant subtypes: activated B-cell, ABC, and germinal center B-cell, GCB, DLBCL. Patients with the ABC subtype have a worse prognosis than those with GCB, and the subtype is defined by chronic, over-active signaling through the B-cell receptor and NF-κB pathways.

Researchers in the David Lawrence Group, in collaboration with colleagues from the Department of Pharmacology, UNC Michael Hooker Proteomics Center, Division of Chemical Biology and Medicinal Chemistry, and Lineberger Comprehensive Cancer Center, published in the Journal of Proteomic Research, have examined the effects of the Src family kinase, SFK, inhibitor dasatinib in a panel of ABC and GCB DLBCL cell lines and found that the former are much more sensitive to dasatinib than the latter. However, using multiplexed inhibitor bead coupled to mass spectrometry, MIB/MS, kinome profiling and Western blot analysis, the group members found that both subtypes display inhibition of the SFKs in response to dasatinib after both short- and long-term treatment.

The MIB/MS analyses revealed that several cell-cycle kinases, including CDK4, CDK6, and the Aurora kinases, are down-regulated by dasatinib treatment in the ABC, but not in the GCB, subtype. The present findings have potential implications for the clinical use of dasatinib for the treatment of ABC DLBCL, either alone or in combination with other agents.