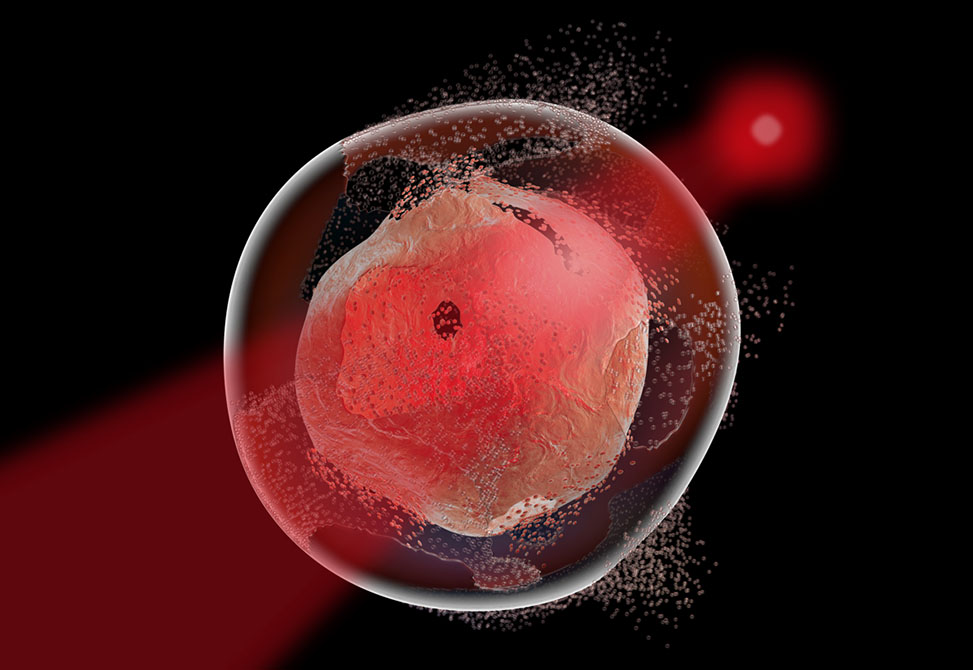 Red blood cells, the most numerous type of cell in the body, can act as light-activated drug delivery vehicles, according to a new study. The technique traps drugs in the cells, where they could circulate for the cells' four-month lifetimes. Red or infrared light shone on a patient's skin or through an inserted fiber optic could release the trapped drugs when and where they are needed.

In the technique, Carolina Chemistry's David S. Lawrence and coworkers first covalently attach a drug and a fluorescent molecule to cobalamin, the core structure of vitamin B-12. The conjugates enter red blood cells passively when the cells’ pores are expanded in a low-salt buffer. But they can't leave when the cells are in normal buffer or in the blood.

Red or near-infrared light, which can pass through tissue, excites the fluorescent group. This energy is then transferred to cobalamin's corrin macrocycle, initiating a photolytic reaction. The reaction cleaves the drug from the complex. Because the drug is membrane permeable, it can exit the red blood cell to become biologically active in the patient's bloodstream. Conjugates with different fluorescent groups could allow selective release of multiple drugs at different wavelengths.

The technique has so far been tested only in isolated red blood cells. In a treatment situation, a doctor would obtain red blood cells from a patient, load them with drug conjugates, and then re-infuse the cells.

Vladimir R. Muzykantov of the University of Pennsylvania, an expert in red blood cell-based drug delivery, comments that "drug delivery by red blood cells has been studied before in animals and is currently being tested in patients. But the level of precision and versatility of the new approach for controlled release of agents from red blood cell carriers is fascinating." The next steps, he says, would be to test the approach in animals and the clinic.

The UNC group has started to test the strategy to treat autoimmune diseases and cancer in animals. Lawrence also founded Iris Biomed, in Chapel Hill, N.C., to commercialize the technology.