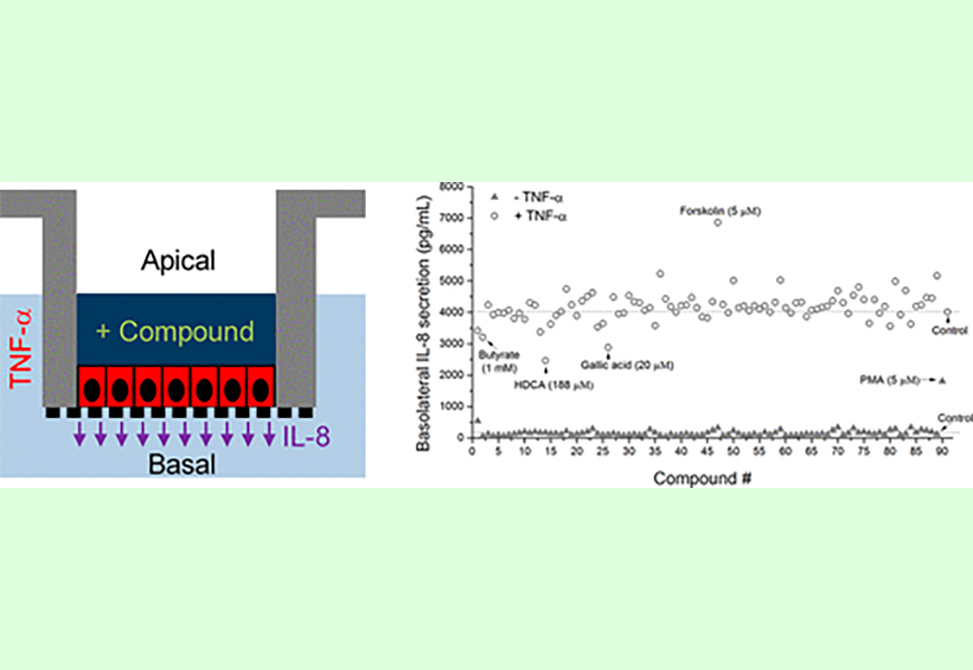 In vitro models of the human intestinal epithelium derived from primary stem cells are much needed for the study of intestinal immunology in health and disease.

In work published in Analytical Chemistry, researchers in the Allbritton Group, describe an intestinal monolayer cultured on a porous membrane with accessible basal and apical surfaces for assay of intestinal cytokine production in response to stimuli. The system was composed of a differentiated, confluent epithelial monolayer derived from human primary stem cells obtained from small or large intestine. Interleukin 8, IL-8, and monocyte chemoattractant protein 1, MCP-1, were the most abundant inflammatory cytokines produced by the intestinal epithelium. The epithelium from all five tested regions of the intestine preferentially secreted into the apical reservoir of the monolayer, with a 26-fold greater concentration of IL-8 present in the apical reservoir of the colonic monolayer relative to that in the basal reservoir.

Upon application of tumor-necrosis factor α, TNF-α, to the basal surface of the colonic monolayer, the IL-8 concentration significantly increased in the basal, but not the apical, reservoir. A dose-dependent elevation of IL-8 in the basal reservoir was observed for TNF-α-stimulation of the monolayer but not for an organoid-based platform.

To demonstrate the utility of the monolayer system, 88 types of dietary metabolites or compounds were screened for their ability to modulate IL-8 production in the basal reservoir of the intestinal monolayer in the absence or presence of TNF-α. No dietary metabolite or compound caused an increase in IL-8 in the basal reservoir in the absence of TNF-α. After addition of TNF-α to the monolayer, two compounds, butyrate and gallic acid, suppressed IL-8 production, suggesting their potential anti-inflammatory effects, whereas the dietary factor forskolin significantly increased IL-8 production.

These results demonstrate that the described human-intestinal-monolayer platform has the potential for assays and screening of metabolites and compounds that alter the inflammatory response of the intestine.