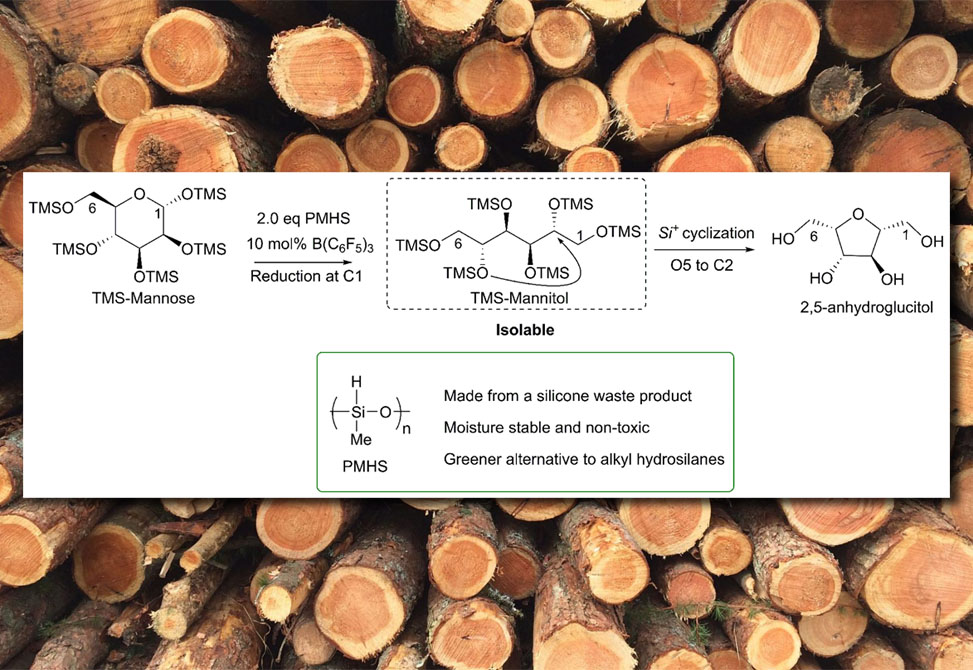 Easy to be Green!

The stereochemical richness of cellulosic biomass, a biorenewable carbon source, makes it an attractive feedstock for the production of fine chemicals that would otherwise be difficult to synthesize from petrochemical resources. Researchers in the Gagne Group, have previously used alkyl hydrosilanes, in combination with the electrophilic borane catalyst B(C6F5)3, for the site selective reduction of C–O bonds in carbohydrates. Not only can hydrosilanes serve as reducing agents, they can also be sources of silylium for the controlled cyclization of linear sugars to valuable anhydro sugar products.

Poly(methylhydrosiloxane), PMHS, is a greener and cheaper alternative to traditional alkyl hydrosilanes, as it is produced from a silicone industry byproduct. Published in Green Chemistry, postdoctoral research assistant Nicholas Hein, and his colleagues in the Gagne Research Group, used PMHS with catalytic B(C6F5)3 for the one-step conversion of various carbohydrates to high value products.

By carefully controlling the equivalents of PMHS relative to the sugar substrate, linear sugar polyols, from reduction, or anhydro sugars, from subsequent cyclization, could be obtained. In some instances, the observed cyclized product differed from those previously obtained using alkyl hydrosilanes. For example, silyl-protected mannose can be directly converted to an anhydro product resulting from O5 to C2 cyclization.

This product has only previously been obtained from mannitol when using boronium ions for cyclization. Thus, not only is PMHS a greener reducing agent, but it also affords unique reactivity when compared to traditional alkyl hydrosilanes.