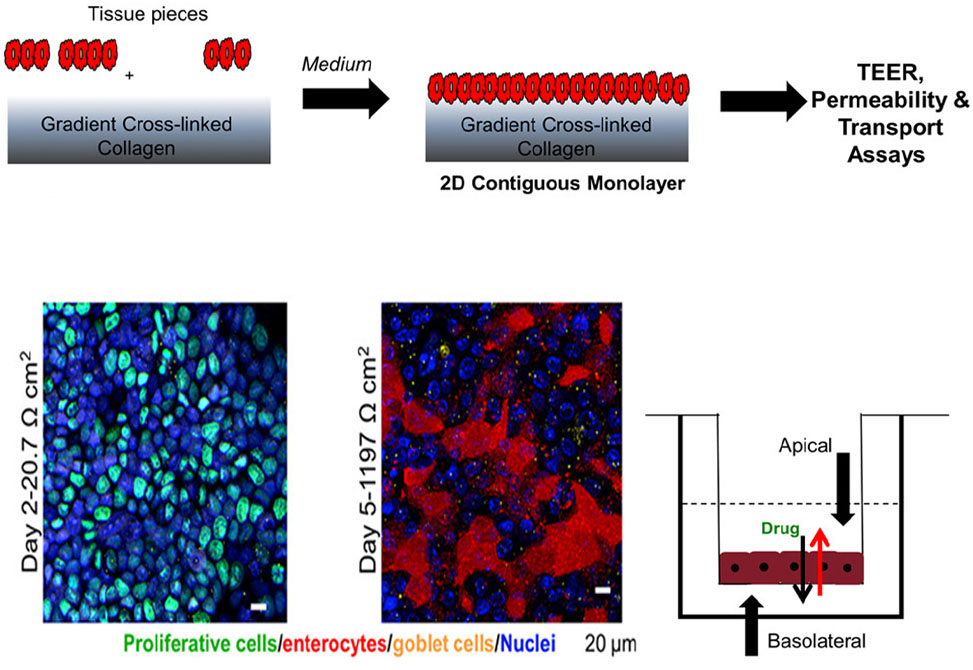 Animal models are frequently used for in vitro physiologic and drug transport studies of the colon, but there exists significant pressure to improve assay throughput as well as to achieve tighter control of experimental variables than can be achieved with animals. Thus, development of a primary in vitro colonic epithelium cultured as high resistance with transport protein expression and functional behavior similar to that of a native colonic would be of enormous value for pharmaceutical research.

A collagen scaffold, in which the degree of collagen cross-linking was present as a gradient, has been developed to support the proliferation of primary colonic cells by researchers in the Allbritton Group, in collaboration with colleagues at the Division of Pharmacoengineering and Molecular Pharmaceutics, Eshelman School of Pharmacy, and the Department of Genetics and Lineberger Comprehensive Cancer Center. Their effort is published in Analytical Chemistry.

The gradient of cross-linking created a gradient in stiffness across the scaffold, enabling the scaffold to resist deformation by cells. mRNA expression and quantitative proteomic mass spectrometry of cells growing on these surfaces as a monolayer suggested that the transporters present were similar to those in vivo. Confluent monolayers acted as a barrier to small molecules so that drug transport studies were readily performed.

It is anticipated that this platform of primary colonic epithelium will find utility in drug development and physiological studies, since the tissue possesses high integrity and active transporters and metabolism similar to that in vivo.