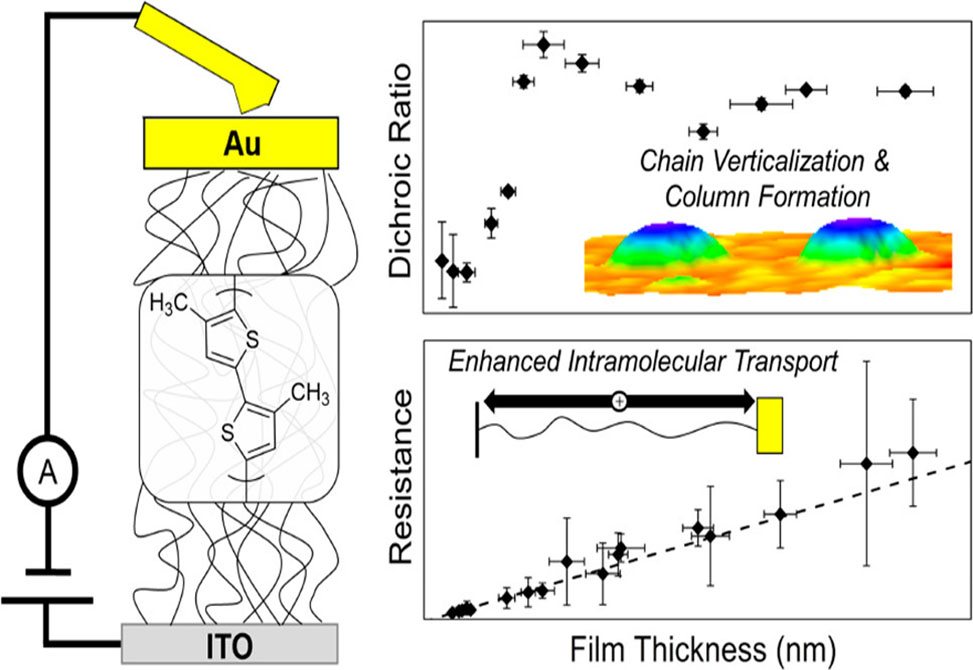 Researchers in the You Group, in collaboration with scientist from UNC's Department of Physics and Astronomy, and the National Institute of Standards and Technology, published in the Journal of Physical Chemistry C, reports on the morphological, structural, and electrical properties of poly(3-methylthiophene) polymer brush films grown on indium tin oxide up to 120 nm thick.

Optical spectroscopy experiments indicate that the average orientation of polymer chains is nearly isotropic at thicknesses below 10 nm and above 30 nm, and exhibits mild vertical anisotropy in between. Atomic force microscopy shows that the film surfaces consist of column-shaped domains with an average cross-sectional area, 2.3 × 10–3 µm2sup>, and density, 200 µm–2sup>, that are independent of film thickness.

Analysis of the contact between printed Au electrodes and the polymer brush film shows that a small fraction of the film surface, in essence, the tallest columns, makes contact with the electrodes. The measured bulk resistivity along the columns is 1.4 × 105 Ω·cm, 2 orders of magnitude lower than typical values for spuncast poly(3-alkylthiophene) films, while the resistance along individual polymer chains in the columns is estimated to be 360 GΩ/nm per molecule, comparable to molecular wires that exhibit charge transport by intramolecular processes.

The enhanced conduction is likely due to additional intramolecular transport pathways enabled by the electrode-polymer brush-electrode device architecture, establishing conjugated polymer brushes as a platform for studying the interplay among synthesis, morphology, and charge transport phenomena.