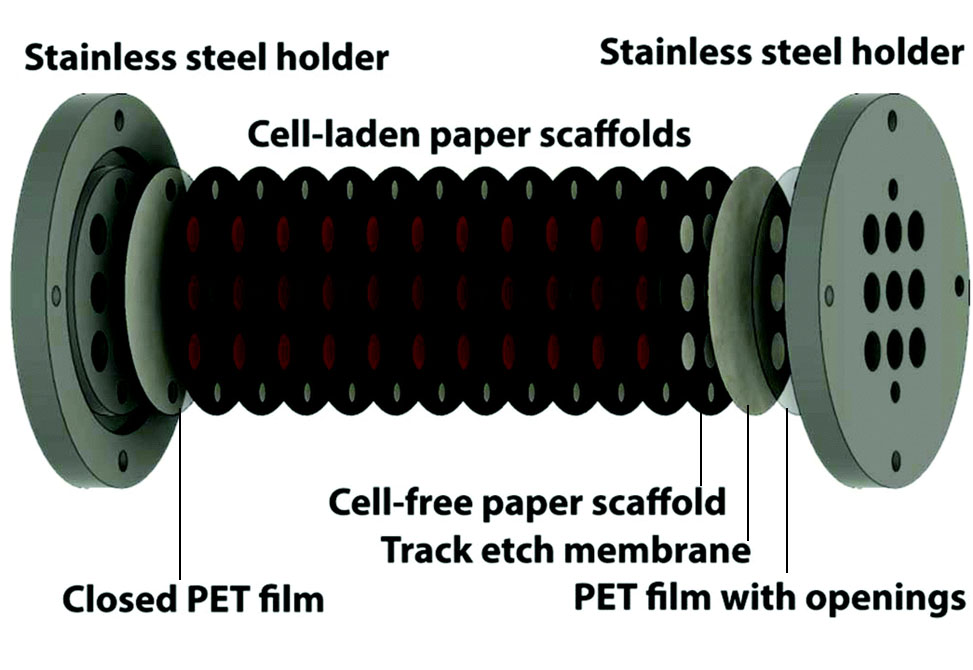 In vitro models for screening new cancer chemotherapeutics often rely on two-dimensional cultures to predict therapeutic potential. Unfortunately, the predictive power of these models is limited, as they fail to recapitulate the complex three-dimensional environments in tumors that promote a chemoresistant phenotype.

Published in the Analyst, researchers in the Lockett Group, in collaboration with colleagues from Notre Dame University, describe the preparation and characterization of paper-based cultures, PBCs, engineered to assess chemotherapeutic effectiveness in three dimensional, diffusion-limited environments.

Similar environments are found in poorly vascularized tumors. Monotonic gradients develop across these cultures, which are assembled by stacking cell-laden paper scaffolds to yield thick tissue-like structures, and provide distinct chemical environments for each scaffold. After prolonged incubation, the scaffolds can simply be peeled apart and analyzed.

Through fluorescence imaging, the scientists determined that viable and proliferative cell populations were most abundant in scaffolds close to the nutrient-rich medium. By adjusting the cell density, they modulated the spatiotemporal evolution of oxygen gradients across the cultures and correlated these environmental changes with cellular sensitivity to SN-38 exposure.

From these results, this study showed that differences in the oxygen gradients produced cellular populations with significantly different chemosensitivities. Through this work, the group members highlight PBCs ability to serve as an analytical model capable of determining chemotherapeutic effectiveness under a range of chemical environments.