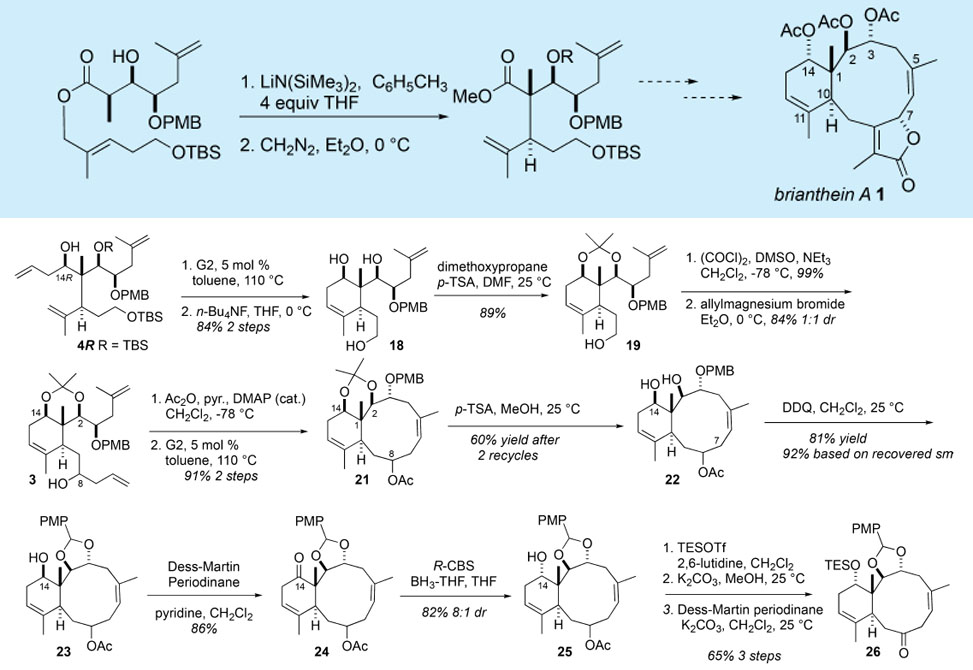 The briarane diterpenes are a class of highly oxygenated marine metabolites that contain a modified cembranoid skeleton. In the context of a broader program directed toward the synthesis of marine natural products, researchers in the Crimmins Group were attracted to the briaranes because of their unique structural features and intrigued by the relative lack of activity reported toward their synthesis.

The synthesis of the briarane−brianthein A core has been accomplished utilizing an extension of the dianionic Ireland−Claisen rearrangement to establish the C1 quaternary carbon and the adjacent C10 ring juncture stereocenters. Two sequential ring-closing metathesis reactions were exploited to construct the 6−10 trans fused ring system.

Examination of the core carbocyclic structure of the briaranes reveals a trans-fused 6,10 carbon skeleton with an angular methyl group completing the substitution of a quaternary carbon at the ring fusion. The quaternary carbon center at the ring fusion and the 10-membered carbocyclic ring were of particular interest due to the paucity of general methods available for their construction. Published in Organic Letters, the group members present an approach to the construction of the briarane skeleton focused toward the synthesis of brianthein A.