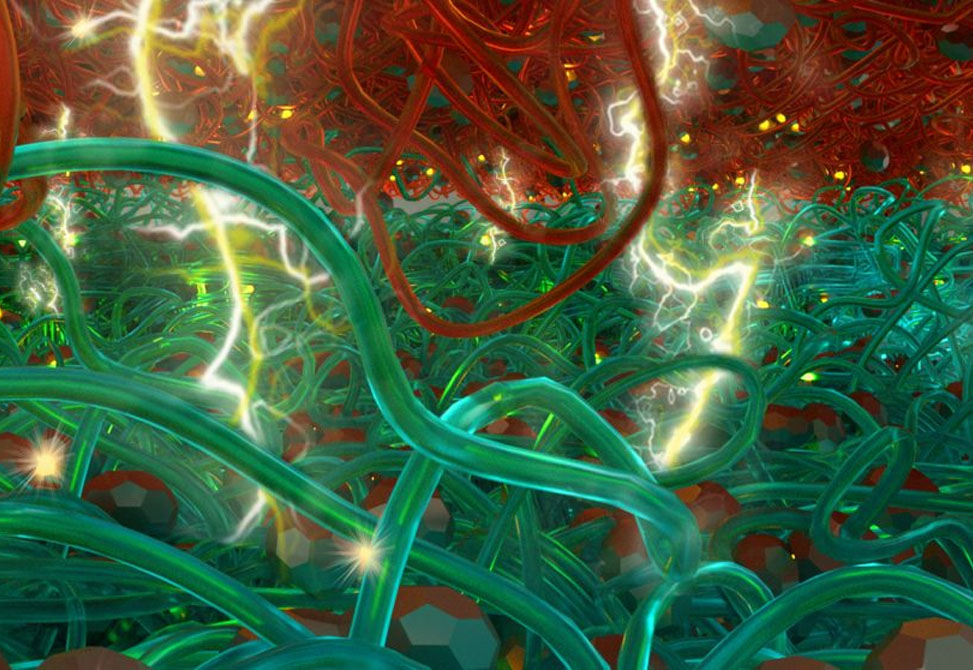 Researchers from North Carolina State University, in collaboration with the You Group here at Carolina Chemistry, have developed a new strategy for fabricating more efficient plastic solar cells. The work has implications for developing solar cells with a wider absorption range and increased efficiency.

As plastic solar cells now rival silicon-based solar cells in power conversion efficiency, researchers want to increase the range of photonic energies that plastic solar cells absorb. Ternary solar cells, in which three materials are mixed together as a light-harvesting layer, offer a potential solution. However, while ternary solar cells have been manufactured for years, most of the devices have not been able to meet desired levels of performance, mainly due to unfavorable mixing.

Masoud Ghasemi, a graduate student in physics at NC State and lead author of a paper, published in Advanced Materials, worked with a team of other NC State physicists led by Harald Ade and chemists from the University of North Carolina at Chapel Hill led by Wei You to identify a way to solve the production problem.

The team proposed a calorimetric tool to study the morphology of a ternary system with two absorption-matched donor polymers and a fullerene acceptor. When fabricated by the traditional method, which involves mixing all three materials together and then depositing them onto a substrate, the system gave poor device performance.

"Using thermodynamic techniques, we were able to find that this particular mixture was undergoing 'alloying,' in which the donor polymers tend to group up together and push the fullerene away," Ghasemi says. "This explains why so many conventionally produced ternary cells may have low efficiency."

The team decided to solve the alloying problem by mixing each polymer separately with the fullerene, rather than mixing all three materials together at once. They created two distinct mixtures which were layered onto the substrate, creating sequentially cast ternary, SeCaT, solar cells, which did not fall prey to alloying.

"The SeCaT solar cells prevent the polymers from mixing due to their layered structure," Ghasemi says. "This novel design allows fabrication of plastic solar cells with wider optical sensitivity using cheap and scalable processing steps and with reduced materials selection constraints. Hopefully this new method can be particularly useful for greenhouse applications toward zero energy farming, as the materials used to demonstrate our method have optical properties compatible to these applications."