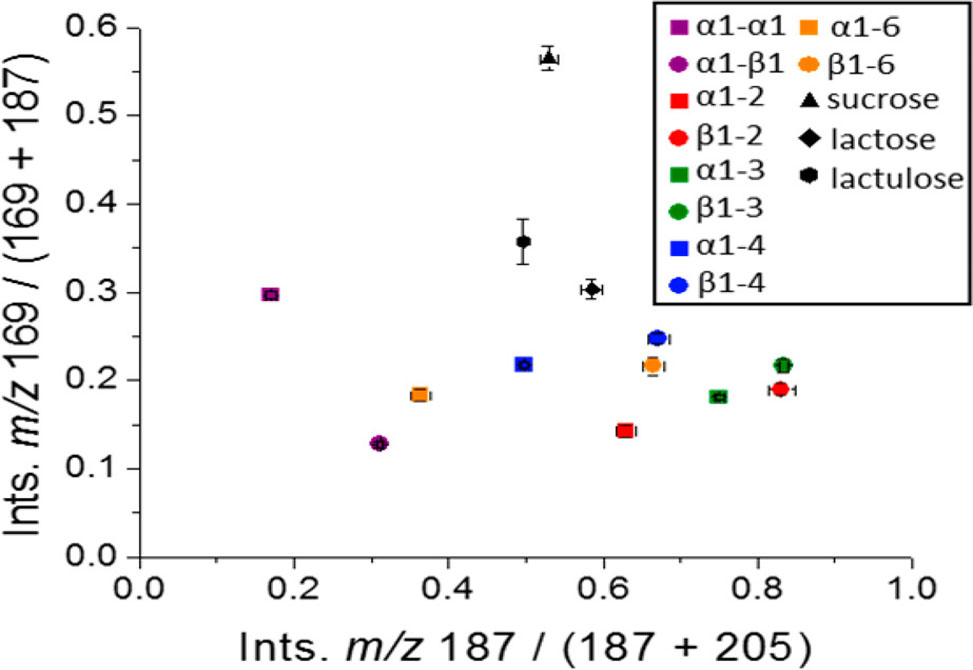 Researchers in the Glish Group, published in Analytical Chemistry, have developed a method to distinguish both the linkage position and the anomericity of all reducing and two nonreducing glucopyransosyl–glucose disaccharides using only electrospray ionization–mass spectrometry/mass spectrometry (ESI–MS/MS).

Carbohydrates are well-known to form complexes with metal cations during electrospray ionization. Addition of a lithium salt to a solution containing a disaccharide, M, results in [M + Li]+ after ESI. Collision-induced dissociation of these ions creates product ions at m/z 187 and m/z 169 from cleavage of the glycosidic bond and are present for all disaccharides studied.

Both of these product ions were found to adduct water after their formation in a quadrupole ion trap. The kinetics of this water adduction can be measured by isolating either of the product ions and waiting a short time, less than a second, before mass analysis.

Additionally, for both product ions, only a fraction of the ions were able to adduct water. This unreactive fraction was measured along with the reaction rate, and the combination of these two values was found to be unique for each disaccharide. Furthermore, after CID, a 1000 ms delay can be added, and the ratios of the resulting products ions of m/z 169, 187, and 205 can be used to distinguish linkage position and anomericity with a single tandem mass spectrometry experiment.