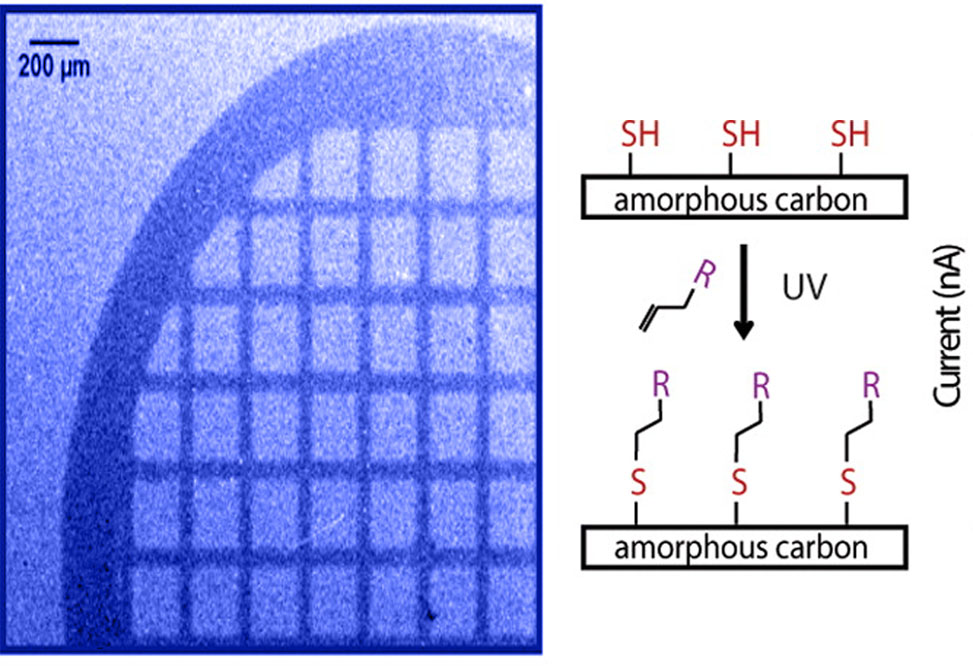 Amorphous carbon, aC, films are chemically stable under ambient conditions or when interfaced with aqueous solutions, making them a promising material for preparing biosensors and chemically modified electrodes. There are a number of wet chemical methods capable of tailoring the reactivity and wettability of aC films, but few of these chemistries are compatible with photopatterning.

Published in Langmuir, researchers in the Lockett Group introduce a method to install thiol groups directly onto the surface of aC films. These terminal thiols are compatible with thiol-ene click reactions, which allowed the team to rapidly functionalize and pattern the surface of the aC films. They also thoroughly characterized the aC films and confirmed that the installation of surface-bound thiols does not significantly oxidize the surface or change its topography. The group members also determined the conditions needed to selectively attach alkene-containing molecules to these films and show the reaction is proceeding through a thiol-mediated reaction. Lastly, they demonstrated the utility of their approach by photopatterning the aC films and preparing ferrocene-modified aC electrodes.

The chemistry described in this article provides a rapid means of fabricating sensors and preparing photoaddressable arrays of bio/molecules on stable carbon interfaces.