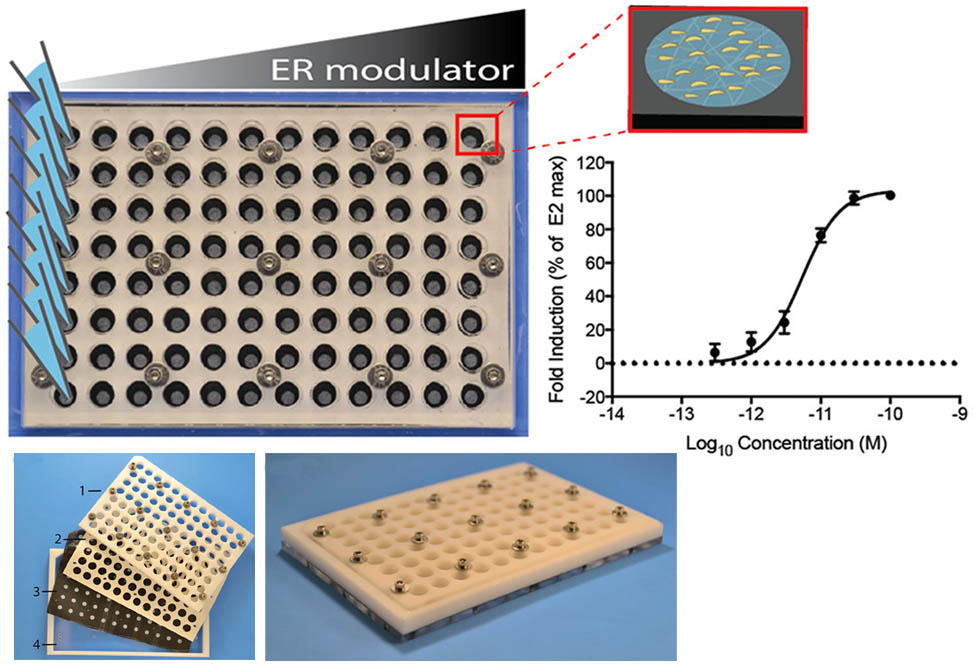 The health risks associated with acute and prolonged exposure to estrogen receptor, ER, modulators has led to a concerted effort to identify and prioritize potential disruptors present in the environment.

ER agonists and antagonists are identified with end-point assays, quantifying changes in cellular proliferation or gene transactivation in monolayers of estrogen receptor alpha expressing, ER+, cells upon exposure. While these monolayer cultures can be prepared, dosed, and analyzed in a highly parallelized manner, they are unable to predict the potencies of ER modulators in vivo accurately. Physiologically relevant model systems that better predict tissue- or organ-level responses are needed.

To address this need, researchers in the Lockett Group, published in Analytical Chemistry, have developed a screening platform capable of quantitatively assessing ER modulators in 96 chemically isolated 3D cultures. These cultures are supported in wax-patterned paper scaffolds whose design has improved performance and throughput over previously described paper-based setups.

To highlight the potential of paper-based cultures for toxicity screens, the group members measured the potency of known ER modulators with a luciferase-based reporter assay. They also quantified the proliferation and invasion of two ER+ cell lines in the presence of estradiol.

Despite the inability of the current setup to better predict in vivo potencies of ER modulators than monolayer cultures, the results demonstrate the potential of this platform to support increasingly complex and physiologically relevant tissue-like structures for environmental chemical risk assessment.