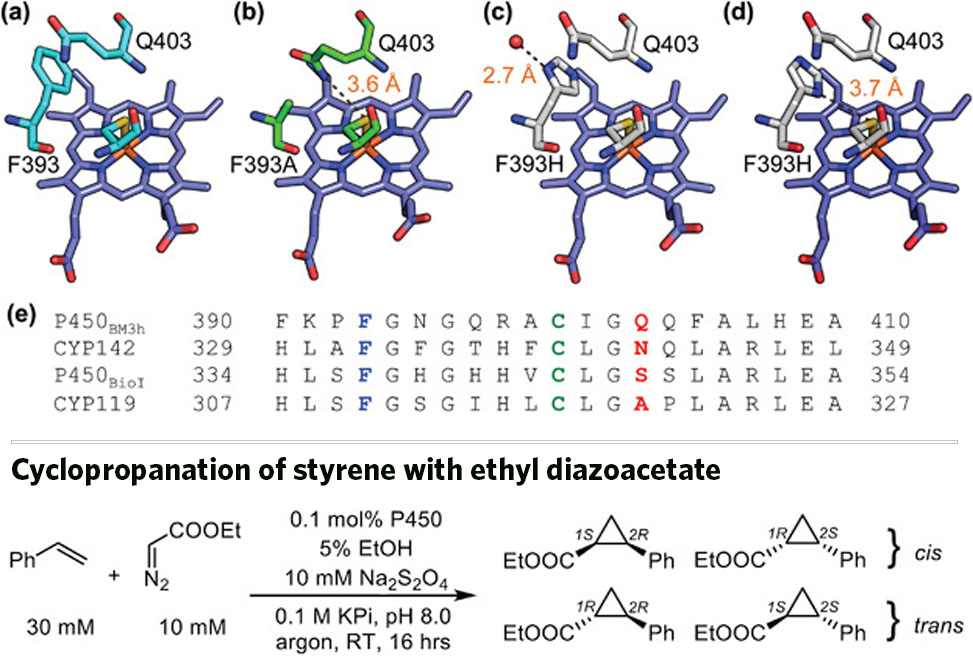 In recent years, cytochrome P450s, P450s, and other heme proteins have attracted intense interest due to the discovery that the protein‐bound heme cofactor catalyzes promiscuous metallocarbenoid and ‐nitrenoid insertion into olefins and X‐H bonds, X = C, N, S, Si, enabling novel biosynthetic routes for the construction C‐C, C‐N, and other bonds.

Engineered cytochrome P450s are hence emerging as powerful synthetic tools due to their ability catalyze non‐native metallocarbenoid and ‐nitrenoid insertion reactions. P450‐mediated cyclopropanation has garnered particular interest due to the high selectivity demonstrated by engineered scaffolds and their application towards the synthesis of therapeutic agents.

Researchers in the Brustad Group previously reported that mutation of a conserved, first‐shell heme‐ligating Cys to Ser led to significant improvements in cyclopropanation activity in a model enzyme, P450BM3h. In this work, published in Biotechnology and Bioengineering, group members demonstrate that mutation of a ubiquitously conserved second‐shell Phe, F393, to His or Ala, provides complementary increases in the P450 heme reduction potential and conversion to cyclopropanation products when compared to first‐shell Cys to Ser mutations.