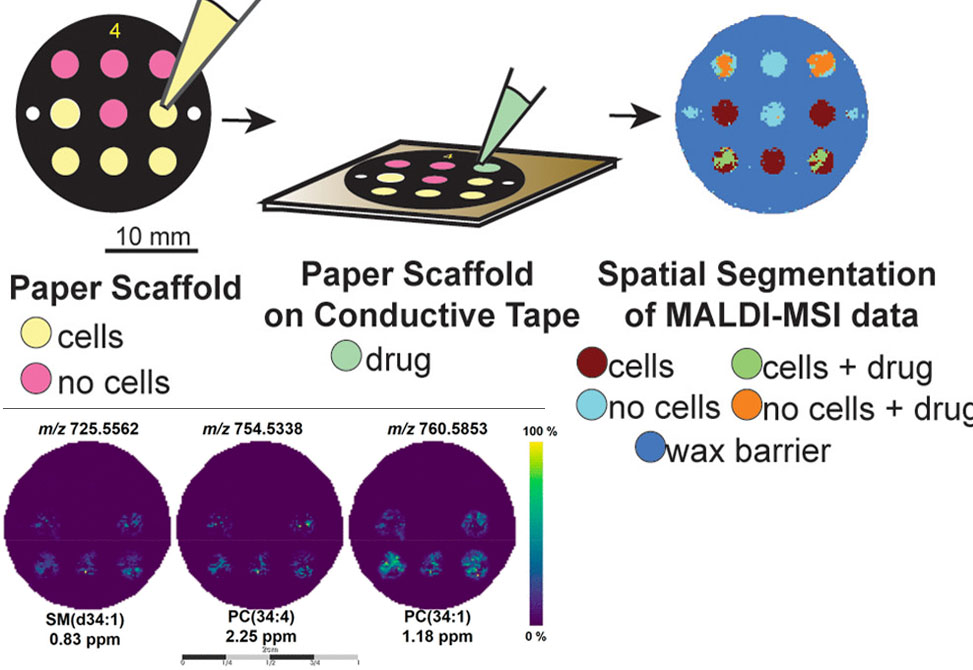 Many potential chemotherapeutics fail to reach patients. One of the key reasons is that compounds are tested during the drug discovery stage in two-dimensional, 2D, cell cultures, which are often unable to accurately model in vivo outcomes. Three-dimensional, 3D, in vitro tumor models are more predictive of chemotherapeutic effectiveness than 2D cultures, and thus, their implementation during the drug screening stage has the potential to more accurately evaluate compounds earlier, saving both time and money.

Paper-based cultures, PBCs, are an emerging 3D culture platform in which cells suspended in Matrigel are seeded into paper scaffolds and cultured to generate a tissue-like environment.

In this collaborative study performed by members from the Lockett Group and the Hummond Lab at the Ohio State University, published in Analytical Chemistry, the researchers demonstrate the potential of matrix-assisted laser desorption/ionization–mass spectrometry imaging with PBCs, MALDI-MSI-PBC, as a drug screening platform.

This method discriminated regions of the PBCs with and without cells and/or drugs, indicating that coupling PBCs with MALDI-MSI has the potential to develop rapid, large-scale, and parallel mass spectrometric drug screens. The chemical information provided by MALDI-MSI-PBC can also be complemented by additional cellular assays to better understand chemotherapeutic metabolism in relation to the local cellular environment.