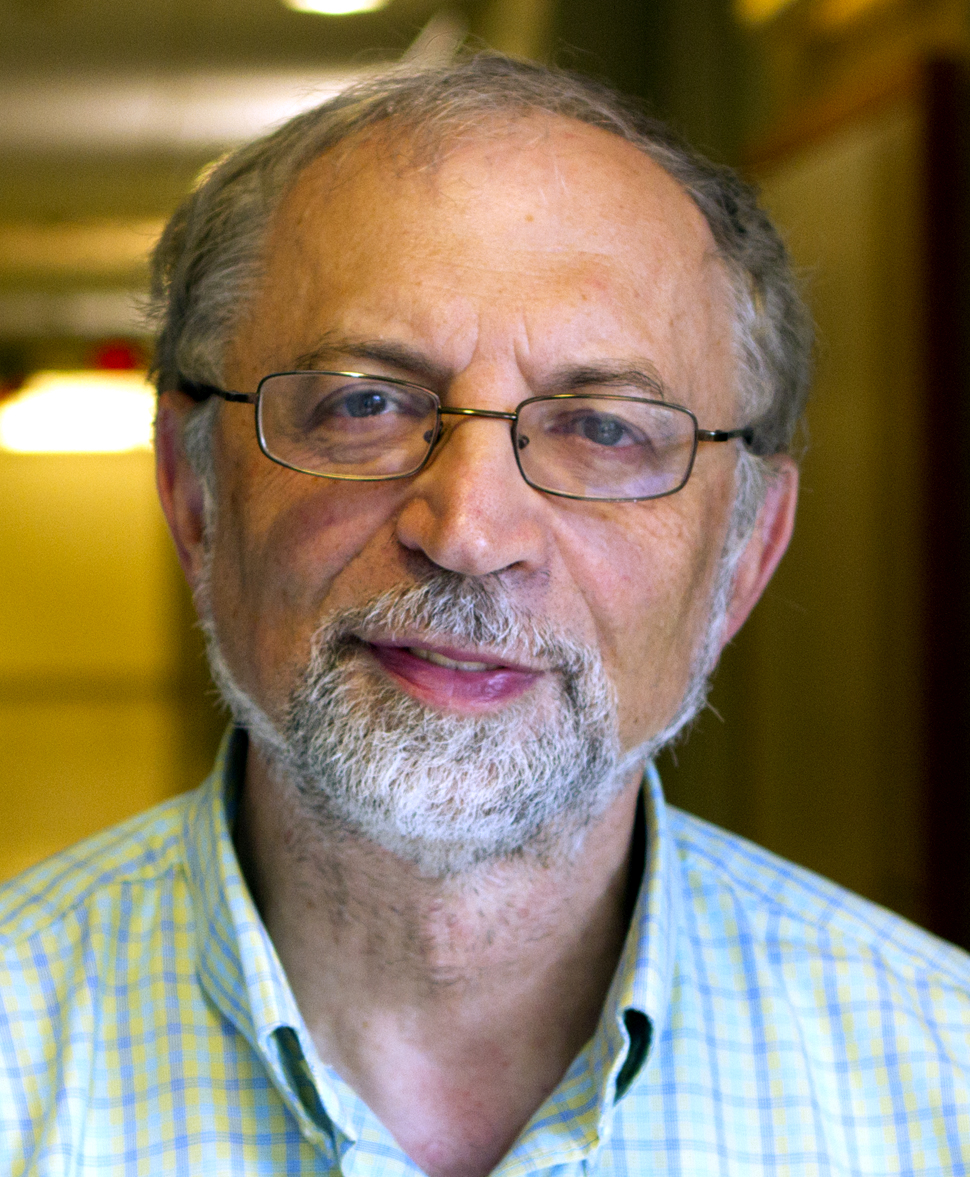 Our group uses ideas and methods from theoretical physical chemistry to describe structural and dynamical properties of biological membranes, their interactions with proteins and peptides and their response to cavitation effect. Also, in collaboration with Professor Kanai, we study the effect of charge transfer on properties of water.

Collapse of Nanobubbles in the Vicinity of Bio-Membranes
The interaction of shock waves with biological cells can produce both positive and negative effects: controlled shock waves have a potential for medical use, since they increase the permeability of cell membranes and this allows various macromolecules, such as drugs and also genetic material to enter the cell. On the negative side uncontrolled shock waves produced during a blast may damage brain cells, thus causing blast induced traumatic brain injury, bTBI, and neural cell damage or even its death. The effect of shock waves on biomembranes can be enhanced by the collapse of bubbles present in the vicinity of these membranes. Thus, ultrasound induced collapse of microbubbles is found to be responsible for the permanent poration of cell membranes due to the formation of a fluid jet as a result of a bubble collapse. Not only the collapse of microbubbles, but also of nanobubbles is considered to have a potential to produce substantial pores in a cell membrane due to a shock wave impact.

Detailed information about the process of nanobubble collapse and the resulting damage to a biomembrane can be obtained from molecular simulations. Recently, our group investigated the effect of shock wave induced collapse of a single and also multiple nanobubbles by using coarse-grained, CG, molecular dynamics simulations. We observed that the presence of nanobubbles located next to bilayer that are hit by the shock wave substantially increases the damage done to membranes. Very recently we studied how the proteins, such as channels, we studied K+ conducting channels, behave when cavitation of bubbles occur in their vicinity. We observed that shock wave induced bubble collapse produces adverse effects on a membrane bound ion channel and this can result in a faulty ion regulation in the cell.

We also investigated the effect of nanobubble collapse that, as it was suggested, can occur in the blood capillary. This collapse may cause damage, or even destruction of the blood-brain barrier, BBB, by damaging or even destroying the tight junction, TJ, between the BBB cells. In our simulations we considered model systems with the TJ containing two pairs of the TJ protein — claudin. When no bubble was present in the system we did not observe any damage done to the TJ upon passage of the shock wave. In cases when bubbles of 30 nm in diameter were present in the system, their collapse under the influence of the very mild shock wave with an impulse of ∼8 mPa∗s produced some small damage to the TJ. When the impulse of the shock wave was more than 4 times larger our model TJ was destroyed.

Although our simulations were performed on relatively simple systems, they show the crucial role played by the presence of nanobubbles and the cavitation effect in causing severe damage to cell membranes and proteins embedded in the cell membranes. More simulations that consider more realistic cellular components such as BBB are needed to understand the effect of bubble collapse on the cell.

Interaction Between Anti-Microbial Peptides and Bio-Membranes
Of special interest to us are interactions with antimicrobial peptides, AMPs. Natural AMPs represent first line of defense of eukaryotic cells against invading bacteria and they act by destroying bacterial membranes. In addition, a great number of AMPs have been shown to have anti-viral and anti-cancer properties. 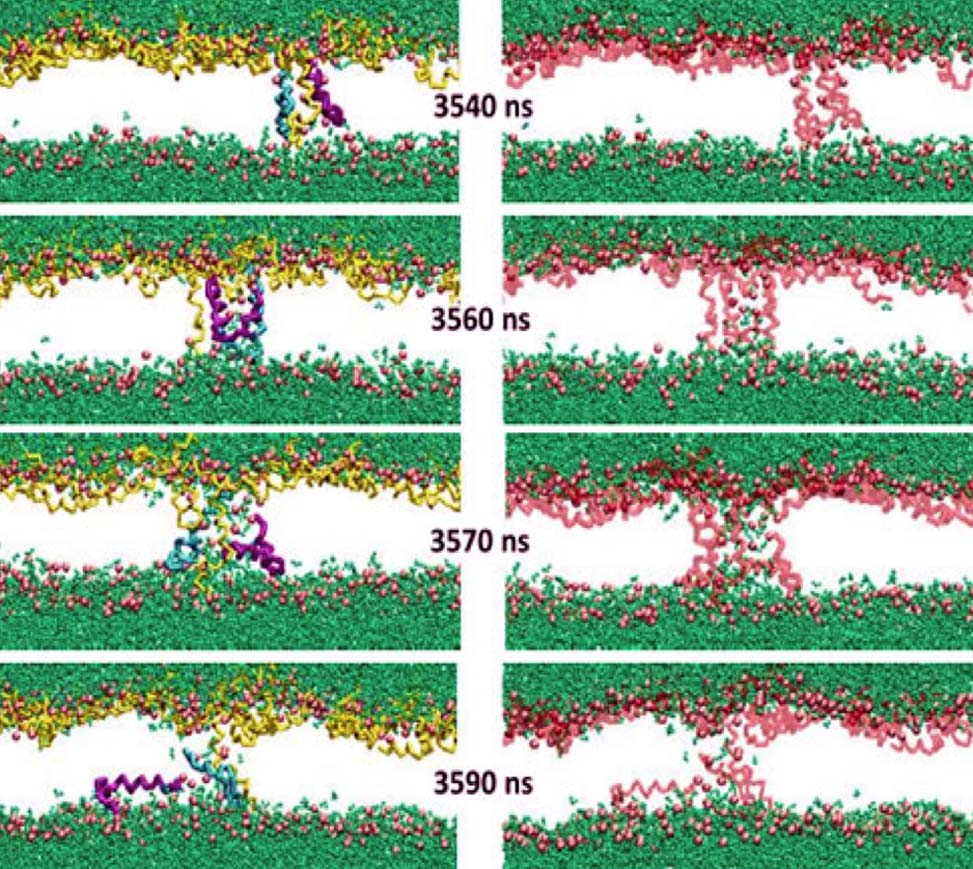 Although scientists are aware of the existence of antimicrobial peptides for more than thirty years, we are still lacking fundamental knowledge about mechanisms of their action. Our goal is to gain this knowledge. Understanding the mechanisms of action is also necessary, if we want to use natural AMPs, or synthetic ones as antibiotics or anti-cancer drugs. In our studies we use computer simulations techniques, such as molecular dynamics. Due to very complicated nature of the problem we need to use both detailed description of the system and also coarse-grained description and switch from one description to another during our simulations.

Charge Transfer in Water
The translational diffusivity of water in solutions of alkali halide salts depends on the identity of ions, exhibiting dramatically different behavior even in solutions of similar salts of NaCl and KCl.

Recently Professor Kanai, our joint student Yi Yao, and I showed that explicit inclusion of the charge transfer allows us to model accurately the difference in the concentration-dependent water diffusivity around Na+ and K+ ions in simulations. This is likely to impact modeling of a wide range of systems for medical and technological applications.

Stretch-Induced Cavitation: How Critical Cavity Radius and Barrier Energy, Radius, and Energy of a Stable Cavity Depend on the Stretching Factor 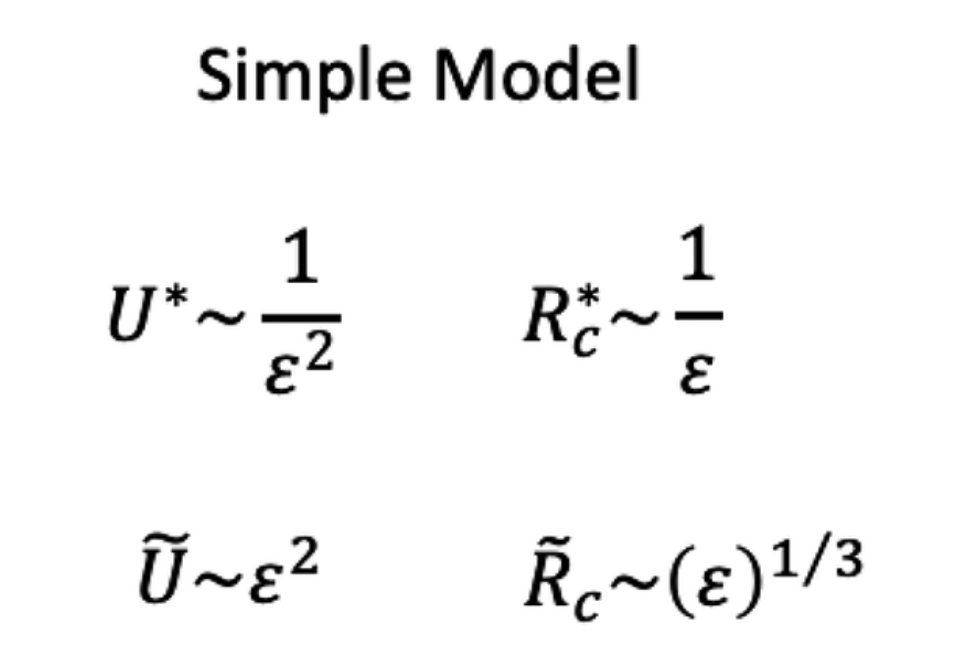 In this work, we study how the characteristics of the cavitation mentioned above scale with the amount of applied tension.

When a finite sample of water experiences tension, it may develop voids – bubbles. Sa Hoon Min, a postdoctoral researcher in the Berkowitz Group, published in...